The Smell of Fear 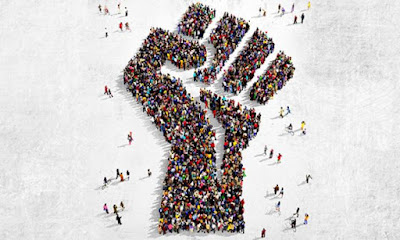 There have been reports of late suggesting that America's CEOs have had something of an epiphany. It seems they're becoming deeply concerned about the wellbeing of the Average Joe. Some are even saying the public interest must now come ahead of their shareholders. Wow, altruism breaks into the boardroom.

Don't count on it.

New York Times opinion columnist, Farhad Manjoo, writes that America's CEOs are fearful of a recession - because they sense it could trigger a revolution.


It isn’t the potential of downturn itself that has them alarmed — downturns come and downturns go, but whatever happens, chief executives, like cats, tend to land on their comfortably padded feet.

Instead, the cause of their fear appears to be something more fundamental. As Alan Murray, the C.E.O. of Fortune, writes in a cover story chronicling the C-suite anxiety: “More and more C.E.O.s worry that public support for the system in which they’ve operated is in danger of disappearing.” They’re worried that when the next recession breaks, revolution might, too. This could be the hour that the ship comes in: The coming recession might finally prompt the masses to sharpen their pitchforks and demand a reckoning.

...The American economy hasbeen growing for more than a decade, stock indexes recently hit new highs, and the unemployment rate is at a 50-year low.

And yet the vast majority of Americans will not look back on the last decade as years of fat and plenty. This was a gilded expansion, a decade of creaking wage growth and profoundly unequal outcomes. The number of Americans receiving food stamps is 40 percent higher now than in 2008, yet we have twice as many billionaires as we did a decade ago.

...This week, in a statement widely feted by well-meaning Davos types, the Business Roundtable — an association of chief executives of nearly 200 companies, including Apple, Amazon, General Motors and Walmart — declared that the era of soulless corporatism was over. The Business Roundtable once held that a corporation’s “paramount duty” was to its shareholders. Now, the Roundtable is singing a new, more inclusive tune. A corporation, it says, should balance the interests of its shareholders with those of other “stakeholders,” including customers, employees, suppliers and local communities.

In other words: no more Mr. Terrible Guy.

...Yay? It’s nice that C.E.O.s have vowed to turn over a new leaf. But their statement lacks any call for greater structural changes in the American economy — changes to how companies are taxed or regulated, or how executives are paid, or how they should be judged.
And because a public corporation’s most direct incentives — including the C.E.O.’s pay — remain tied to stock performance, there’s no reason to believe that corporations will voluntarily move away from pleasing shareholders alone, despite the new, high-minded ideals. In fact, the fanfare surrounding the Roundtable’s empty statement could be read as an effort to stave off structural economic reform rather than accelerate it. It’s a way for the C.E.O.s to tell us that they’re on the case, so we don’t have to resort to something unthinkable, like a Warren presidency.

If I sound cynical, it’s only because I’m not a complete idiot. In the Trump era, America’s C.E.O.s have become masterful at talking out of both sides of their mouths. They’ll rush to issue virtue-signaling denunciations of the latest outrage from PresidentTrump in order to please their woke, restless customer bases, while on the down low, they’ll champion his tax cuts and regulatory dismantling. And when the president gets too rowdy, they’ll tell him to knock it off over a friendly dinner.

It’s all a game to the moguls in charge. Their greatest fear is that we’ll stop playing.

For years Chris Hedges has warned that America has entered a pre-revolutionary state. He compares it to a pot of water on a stove. You never know how long it will take to reach the boil but you do know that it's certain to happen.

Hedges is one of those who has made at least a cursory study of revolution, well past Crane Brinton's and others' primers. He knows that revolutionary change is unpredictable, chaotic and, more often than not, violent. Those who instigate it usually take it in the neck when subsequent waves of revolts and power grabbers they have not foreseen sweep in.

(If you're not familiar with Brinton's 1938 classic, "Anatomy of Revolution," there's a good 9-page summary of it available here, free, in PDF.)

Speaking of Hedges, he did a nice interview with George Galloway in the UK recently. Revolution and Brexit are discussed. The transcript is here:

Kenney as immigration and citizenship minister under stevie the cabaret crooner harper kept Galloway out of Canada, so that he wouldn't corrupt the ears of U of T students and make them think. We were saved by Jesus through Kenney from hearing the thoughts of a man with brains. Under Scheer all news broadcasts will be sports analysis shows instead.

.. super ! Thanks for the PDF link ! Off to a board meeting with the Iguana via Hobie Cat today.. lovely chat with a grazing conch yesterday and upon waving goodby, turned into the curious gaze of a 6 foot silver torpedo the locals call Barry that was sniffing one of my fins.. we've seen her before. The warden assures me he is a she.. Reefs here took a pounding in the last hurricane and a lot of silt hit the corals.. but otherwise the marine environment still pristine.. unlike Canada's.. the shameless Harper destruction of Environmental Protection is getting lip service and stroke job under Trudeau.. and I am enraged.. disgusted.. I am embarrassed while being here in Providentiales and seeing how they defend Environment, Species, Habitat ferociously..