Think of It As the Colour of Prosperity 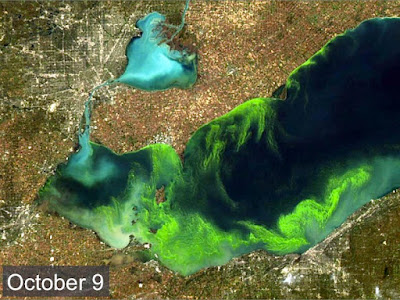 To the whingers it's blue-green algae, the toxic growth that fouls our rivers and lakes and triggers massive coastal dead zones but Nixon vice-president and jailbird Spiro Agnew knew those types as 'nattering nabobs of negativity.' 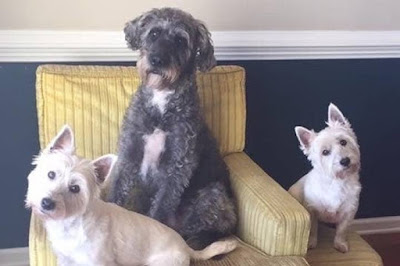 Okay, it's not ideal for your pets. These three little guys splashed around in it one afternoon and were dead of liver failure before the next sunrise, but hey, we have to eat after all. That blue-green algae is a by-product of agricultural chemical runoff that puts food on your table. 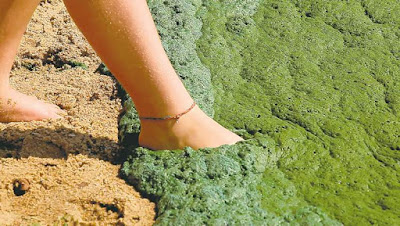 It's smelly and yucky and gross. It's also laced with neurotoxins.  You think that's bad, you oughta see what's going on in China, a.k.a. The Peoples Republic of Neurotoxins R Us. 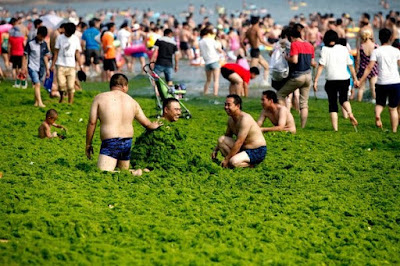 This post isn't really about algae. It's about our global indifference to the increasing backup of all forms of pollution and contamination.  To borrow a few lines from the previous post:

That's the way we like it and we're damned good at it.

Sure it's a one way street to the cliff edge. Sure, there's a day of reckoning. Still, that's the way we like it.

The algae, that's the easy stuff. You can see it from space, you can splash in it, you can burn your skin and self-inflict neurological damage, you can even kill your dogs, but there is so much more. 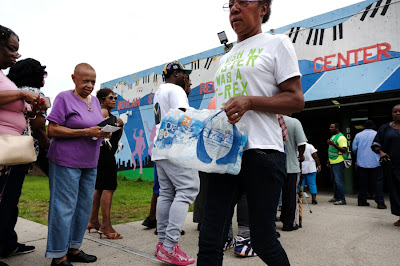 Speaking of neurotoxins, lead is a winner. You've probably heard of Flint, Michigan's problem with toxic levels of lead in the municipal water supply and the fiasco that ensued from a state government in no great rush to come to the rescue. Now it's Newark, New Jersey, and Pittsburgh, Pennsylvania's turn in the spotlight.


No amount of lead is considered “safe,” but the federal government has set a limit of 15 parts per billion in drinking water. At one point, tests in Flint revealed lead levels at over 100 ppb. In July, a test showed Newark water lead levels at 55 ppb. In both cases residents say the city’s denials and delays came at a cost to their wellbeing.

“The mayor keeps saying that this isn’t like Flint,” Newark resident Shakima Thomas told Grist way back in November. “It is the same as Flint in the way that they tried to cover it up. We were victimized by this administration. They gamble with our health. They put politics first before justice.”

And that pattern appears to be continuing. Some experts say they already have a good idea of where the “next, next Flint” might be.

These are not insurmountable threats. All it takes is government willing to spend money to protect citizens. When members of Congress got wind they were drinking contaminated water they sprang into action.


Given the proper incentive though, she said, change can happen fast — like when Washington, D.C. discovered it had a lead problem back in 2004. “They got that taken care of very quickly, by comparison,” she said, “because there were members of Congress drinking the water.”

Such is life in the era of Every Day Low Taxes.
Posted by The Mound of Sound at 2:06 PM

And, in Ontario, where our Conservation Authorities have included trying to mitigate the causes of algae the PC government has ordered them to “focus on their core mandate” (basically flood control), and stop all these other things they’ve be doing. At the same time the government has cut funding for their “core mandate” by 50%.

That being said, anything beyond the core mandate was funded from other sources and has nothing to do with provincial funding. Our (Ontario) government is playing with as full a deck as our neighbour in the White House to the south. They want to cut services that they do not even fund. Unfortunately, they control what the CAs can and cannot do.

The Ontario PCs think they have a mandate to do all these things they proposed. The only mandate they have is to not be the Wynne Liberals.

I am surprised they have come out of their shells now. I thought they were going to keep quiet until,after the federal election.


The bright side, UU, is that unlike Mike Harris, Ford has little chance of re-election.

I do not understand why the good and smart elected PC politicians align themselves with Ford. Many have since been moved [demoted?] from their original cabinet positions. Even though I am not a PC, I have lost any respect for these PC politicians. Do they care? I think maybe they should. Any in bell weather ridings will be toast.


How can you rationalize how conservative Republicans ended up indentured to Trump? I think it's a very similar dynamic.

Some time ago I read an analysis that held, in politics, people now run for office to be in office. Service to country or province of municipality is a much lower priority. There's always been an element of that but to those who've been around long enough to remember people like Mike Pearson, the difference is glaring.

Drew Barnes in Medicine Hat is a prime example of what you mention in 11:00 Mound. Anyong