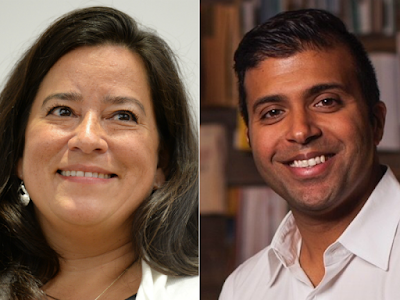 Until yesterday I had never heard of Taleeb Noormohamed, a 42 year old "tech entrepreneur" the Liberals have chosen to run against Jody Wilson-Raybould in the Vancouver Granville riding.

I don't know what Taleeb or the Liberal riding association thought their odds were yesterday but they're probably a good deal less optimistic today with the release of a report from Canada's ethics commissioner that slammed Trudeau for trying to strongarm Wilson-Raybould on behalf of SNC-Lavalin.

"The evidence showed there were many ways in which Mr. Trudeau, either directly or through the actions of those under his direction, sought to influence the Attorney General," Dion wrote, in his report released Wednesday.

"The Prime Minister, directly and through his senior officials, used various means to exert influence over Ms. Wilson‑Raybould. The authority of the Prime Minister and his office was used to circumvent, undermine and ultimately attempt to discredit the decision of the Director of Public Prosecutions as well as the authority of Ms. Wilson‑Raybould as the Crown's chief law officer," Dion said.

Dion found Trudeau contravened Section 9 of the Conflict of Interest Act through a series of "flagrant attempts to influence" Wilson‑Raybould to reach an agreement with SNC-Lavalin to avoid criminal prosecution. That section of the code prohibits any official responsible for high level decision-making in government from seeking to influence the decision of another person to "improperly further another person's private interests."

This must come as shocking news to Trudeau's fan club who have been dismissing the whole business as a 'fake scandal.' Apparently it's a very real scandal, not fake at all.

Let's hope the ethics commissioner's report also works in favour of former Liberal cabinet minister, Jane Philpott, who resigned from cabinet and was ingloriously turfed out of the Liberal caucus for standing with Wilson-Raybould.

As for Taleeb, I wonder if this is time for him to take another powder.
Posted by The Mound of Sound at 12:24 PM

I suspect the fork has arleady been stuck into Jody in a tragic ' own goal incdent ' .


I don't know about that, Rumley. It's a fairly upper-middle class riding. Even the local Liberals now have to accept that what she did was right and the fate meted out to her by Trudeau falls on his shoulders, not hers.

After reading the findings the considerable doubt I once held is resolved. I hope both JWR and Jane Philpott hold onto their seats. The Liberals don't deserve to hold either of them.

Sometimes you eat the Bear.. sometimes the Bear eats you' as the stranger at the bar says dryly.. end of The Big Lebowski.. Its a classic line.. I lose 'followers' on Twitter daily for extolling the principles Mrs Philpott and Ms Wilson-Reybould upheld.. & I must say.. I hope their respective ridings and electorate 'get that' .. This was a case where Warren Kinsella was bang on.. early on.. and also took mucho abuse for..

Silly stuff - sold out stuff - from OUR Prime Minister, his PMO, his Party.. his other MP's in the caucus.. they deserve everything they get for being caught with their pants down or their skirts way too high.. though sadly, Canadians getting a bad dose of Andrew Scheer and his scumbags.. hardly seems a useful reward.. far from it


I never bought into Kinsella's shtick, Sal, because I questioned his motivation. He's been out to get Trudeau for quite a while and, when the SNC-L business fell into his lap, he pounced on it.

As I wrote earlier, I was conflicted about the Lavalin business. Unlike Mario Dion I didn't have the advantage of the testimony and the documents the Ethics Commissioner had. Neither did Kinsella. Until Dion's findings it was never much more than "did so/did not."

I consider Dion's report a vindication of both JWR and Jane Philpott and I hope it has Liberals searching their collective conscience.

Trudeau now fobs this off as a mistake in the course of attempting to defend Canadian jobs. He seeks to imbue his actions with a noble quality when Dion plainly states it was really an effort to meddle in a criminal prosecution for the sake of partisan political advantage.

Having run Philpott and JWR out of the Liberal caucus for standing up to his wrongdoing, Trudeau owes them at least a sincere apology. I won't hold my breath.

.. the smart move for Trudeau is to excuse to his candidates in the ridings of mrs Philpott and Ms Wilson-Reybould.. withdraw them and not compete.. that would be Huge & Gracious.. hell, even 'sunny' .. even the smart move.. Those two BELONG in our Parliament..


I never thought of that, Sal, because I can't conceive of him doing something of that nature, but you're quite right. At this point I suppose he's more concerned about the security of his own job and caucus loyalty than anything else.

There is one thing this Liberal "chaos" will accomplish: That is, "Mr. Flimsy" will be the next PM of this country discharging his intellectual pretensions that does not have any basis in sound scholarship. Anyong