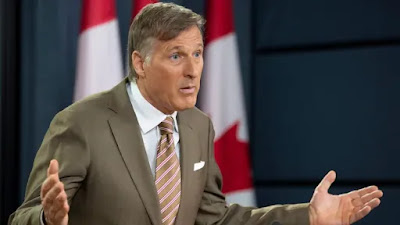 Is this still Canada?


A pre-election chill has descended over some environment charities after Elections Canada warned them that discussing the dangers of climate change during the coming federal campaign could be deemed partisan activity.

An Elections Canada official warned groups in a training session earlier this summer that because Maxime Bernier, the leader of the People’s Party of Canada, has expressed doubts about the legitimacy of climate change, any group that promotes it as real or an emergency could be considered partisan, said Tim Gray, executive director of the advocacy group Environmental Defence.

Any partisan activity – including advertising, surveys, or any kind of campaign costing at least $500 – would require a charity to register as a third party for the election, an onerous requirement that could jeopardize a group’s charitable tax status, Mr. Gray said.

So, if Maxime 'le Pen' Bernier, as fucked up a specimen of humanity as any we'll see this October, says the sky is green, it'll be partisan activity to say 'no, it's blue'. It's political now to recognize the overwhelming scientific consensus because that rancid buffoon disputes it. Maxime Bernier, or whatever he pulls out of his backside, sets the bar for what constitutes political thought in Canada.


“The main reason for climate change, it is not human activity,” Mr. Bernier said Sunday in Gatineau, where his party was holding its first convention.

“There is no climate change urgency in this country.” he said in a speech in June speech. He also disagrees that carbon dioxide, which experts say is responsible for three-quarters of greenhouse emissions globally, is bad.

“CO2 is not ‘pollution,’" he tweeted. “It’s what comes out of your mouth when you breathe and what nourishes plants.”

I'm thinking this is a misinterpretation of the intent. Tim Gray?
EC survived the Harper years and I have a lot of respect for them.

Likely has to do with the Ont-Proud (and wimpy leftie versions of the same)
type of ad campaign, not informed discussion.

They have all gone crazy. Election Canada let's right wing nut jobs trash immigrants but scientists can't warn us? The ethics commissioner carefully misinterprets the act in a way that could affect the election. The privacy commissioner trashes all parties for asking if people will vote for them and making a note of the answer

Where are they getting these clowns.

.. let's see it in writing .. sounds like something Andrew Scheer could saddle up and ride sidesaddle on.. meanwhile I'll wait on the Jason Kenney war room fart Missive in PostMedia or official legal dismissal via the Kinsella Twitter Report (salamander deep in The Turks currently.. communing with devil rays & pelicans) That announcement or pronouncement provided my 5 AM morning laugh.. the Boss said something not fit for print that started with the letter f and ended with assholes..


Tell the Boss I hope she's enjoying the rays and pelicans. That beats the gutter snipes and rats at home any day.

This will show the lefties.

Rumleys link excellent.. afterwards I saw this https://edmontonjournal.com/news/politics/ucp-mass-appoints-friends-to-20-public-boards-including-wcb-aglc-and-universities .. I literally cringed .. at both articles in disgust - maybe Turks & Caicos could buy Canada.. and summarily dismiss most if not all the frauds posing as Premiers.. We also need an actual Prime Minister and PMO.. of courage and leadership who takes her or his cues from US.. (you know - the electorate - the stakeholders - the real people - the yet to be born too) (PS - The Boss is decompressing nicely.. one with the Rock Iguana at Little Water Cay feeding them watermelon from Club Med and apple slices plus freshwater while I hold the fort at Sharkies.. a sanctuary for those aging pirates inclined to dark ales and shots of Bambarra Rum.. prior to snorkelling off Stubbs Point - nice rays n a 6 foot barracuda there yesterday - and sends her regards to The Mound)

The response to Ignorance is Enforced Ignorance? Come off it!

"Allowed: Communicating about policy issues
A charity may carry out PPDDAs that support or oppose a law, policy, or decision of government that a political party or candidate also supports or opposes. A charity can do this at any time, inside or outside of an election period, as long as in doing so the charity does not refer to or otherwise identify the political party or candidate."

OK kids, back to the sandbox.

So Elections Canada, who did the minimum by prosecuting some young flunky in the RackNine/Robocalls scandal is threatening non profit organizations who speak out against climate change. Uh huh. Fire them all.

Don't forget In and Out. The reformatories got a plea bargain. Plead guilty. paid a fine, promised to be good and went on their merry way.

Before we slag the lonely bureaucrats at EC for trying to do their jobs we might think about how regulating spending during the writ period might be a good idea, even if it feels awkward and unfair at times.

" Elections Canada says it will decide on a case-by-case basis whether discussing the legitimacy of climate change becomes a partisan issue for third parties during the federal campaign, and only if it receives complaints."

And on the bright side we can be happy that potential voters are finally riled up about climate change.

Maxime Bernier can deny the Climate Change Crises isn't "man made" and he isn't Partisan? Somewhere there is a cheap joke in that. Anyong.

from the head of EC, during the writ period:
"Whatever they want. Environmental groups can advocate for Canadians to take action to fight climate change, or promote the science behind climate change, without restrictions — providing they do it through email or text messages, online, by canvassing door to door or by giving media interviews.

The only area where Elections Canada requires oversight is paid advertising."
And not because Bernier is chasing the lemmings. It is not "partisan ads", it's "issue ads" and it is regulated during the writ.
And that is a good thing.

From Postmedia ...
at least two voices calling to weaken or end the control of 3rd-party spending during the election writ period.

be careful what you wish for