The Triumph of the Fossil Fuelers. 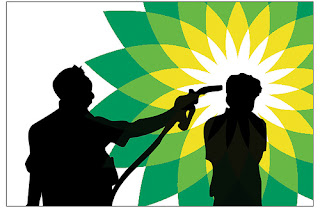 It's come to the point where, if we don't stop them, we're toast.

For a couple of years, OPEC and the International Energy Agency have projected big increases in fossil fuel consumption over the next 30 years. Sure, alternative clean energy will grow but, with the indifference of governments such as our own and their insistence on continuing to give fossil fuels a leg up, the green energy transition is looking like an illusion.

Despite decades of promises to prevent a climate crisis, the primary cause of it — global fossil fuel burning — continues to increase rapidly. Last year's record-breaking burn was a doozy.

And renewable energy — a hoped-for climate solution — has not only failed to halt the explosive rise in fossil carbon burning, it's falling ever-further behind.


Saxifrage has drawn a few illustrative graphs from BP's stats. The first depicts global fossil burn going back to 1990 when the world dutifully agreed that we must do something about this. Not very pretty, is it?  Our 1990 consumption has grown by roughly two-thirds. Next up, Canada. Here's a chart showing fossil fuel burn per capita by country. Hey, hey - look at that, we're Number Two, right behind Saudi Arabia. 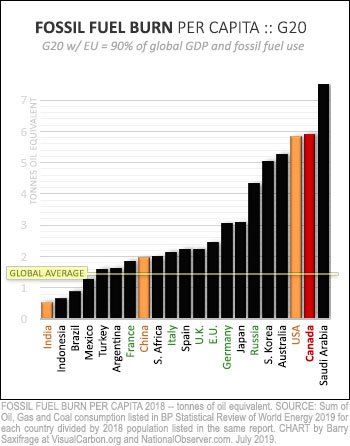 The next two charts show change in per capita fossil fuel burn since 1990 and then Canada's overall fossil fuel consumption to 2018. 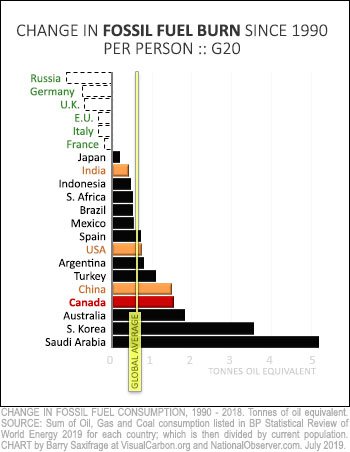 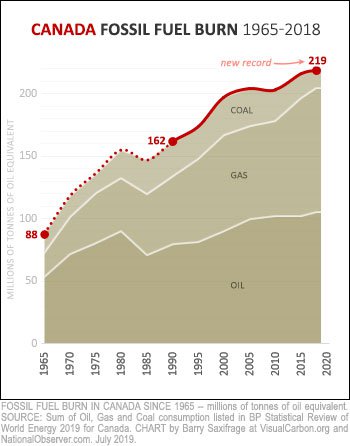 So, unless you enjoy the sensation of smoke being blown up your ass it's time to accept that Andrew Scheer and, yes, Justin Trudeau are very much petro-statesmen. That means they'll lie right into your face and smile while they're doing it.

Canadian politicians like to say that we are world leaders in the climate fight.

The energy data in this BP report shows the opposite. It shows that Canadians burn more fossil fuels per capita than almost any other country. And it shows that instead of cutting back as required to prevent a full-blown climate crisis, we just keep burning more and more.

If Canadians want to pass along a safe and sane climate system to our future generations, we will need to quickly change course. Many of our peer countries peaked fossil burning years ago and have policies we could adopt.

Aren't you tired of the steady diet of their horseshit? You should be. If we're going to stop this we'll have to work around these petro-pols. That starts this October.

Not on topic but relevant...."Three of Canada's biggest oilsands producers are going directly to voters to ask them to "influence the outcome" of big decisions concerning the oil and gas sector as a fall federal election looms.

In full-page ads in about 30 English and French daily newspapers across Canada on Thursday, the CEOs of Canadian Natural Resources Ltd., Cenovus Energy Inc. and MEG Energy Corp. ask readers to call on "leaders of all political stripes" to lend their support to the energy industry."

Personally, I don't like being told who to vote for by a bunch of thieving oil Barons. If these oil & gas corporations can't handle market forces, that's their problem. And to add, this darn oil and gas is still going to be burned and create more environmental problems. Anyong

Personally, I don't like being told who to vote for by a bunch of thieving oil Barons

The same ones that gouged BC for gas prices until the NDP ordered an inquiry then the prices came down a little; what a coincidence.

Trouble is too many have swallowed the kool aid.
What is Cambridge Analytica up to know a days?

I suspect financial loses are our best hope:

BlackRock, the world’s biggest investor, has lost an estimated $90bn over the last decade by ignoring the serious financial risk of investing in fossil fuel companies, according to economists.

A report from the Institute for Energy Economics and Financial Analysis (IEEFA) has found that BlackRock has eroded the value of its $6.5tn funds by betting on oil companies that were falling in value and by missing out on growth in clean energy investments.

If Alberta and Saskatchewan were taken out of the calculations, what would the ROC (rest of Canada) look like then? Would, say, Ontario’s wind turbine projects (the ones Mr. Ford immediately cancelled) as an example, have helped? Me starting to think we have more of a provincial problem here than a national one. Mac

4:57...you have to include Newfoundland & Labrador in your assessment. They produce oil and even though most of it doesn't need refining, it is still burned all by Americans. The selling of oil to the US wasn't Newfoundland's decision but that of the Federal Government at the time. Saskatchewan and offshore areas of Newfoundland in particular have substantial oil production and reserves. Alberta has 39% of Canada's remaining conventional oil reserves, offshore Newfoundland 28% and Saskatchewan 27%, but if oil sands are included, Alberta's share is over 98%. Newfoundland has not received equalization since Nov.3, 2008. Albertans and the rest of the West would do well to realize it isn't truthful to say, "the east knows nothing about oil production". Anyong

Approx 96% of Canada's Energy Reserves Are In Alberta's Tar Sands