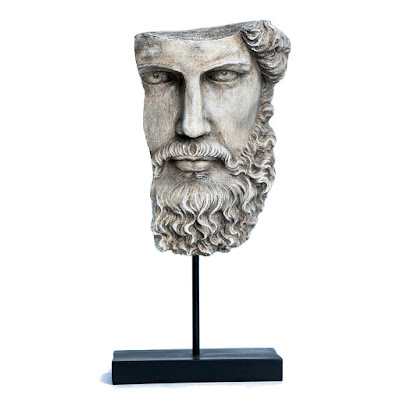 Every now and then you stumble across something that was hiding in plain sight. In my case it was the discovery of the BBC.com site, Future.  There are some really good, thought-provoking essays to be had at BBC Future.  Definitely worth a browse.

For starters let's look at two essay's from the site's "Deep Civilization" section. The first asks  "Are we on the road to civilization collapse?" The author is Luke Kemp, a researcher at the Centre for the Study of Existential Risk at Cambridge. The second is "How Western civilization could collapse" by Rachel Nuwer.

Both are long but fascinating reads. I'll just touch on a few highlights of Kemp's essay. I'll save Nuwer's for another day but you can read it for yourself at the above link.

Kemp works from research he has done at Cambridge.


Great civilisations are not murdered. Instead, they take their own lives.

...Our deep past is marked by recurring failure. As part of my research at the Centre for the Study of Existential Risk at the University of Cambridge, I am attempting to find out why collapse occurs through a historical autopsy. What can the rise and fall of historic civilisations tell us about our own? What are the forces that precipitate or delay a collapse? And do we see similar patterns today? 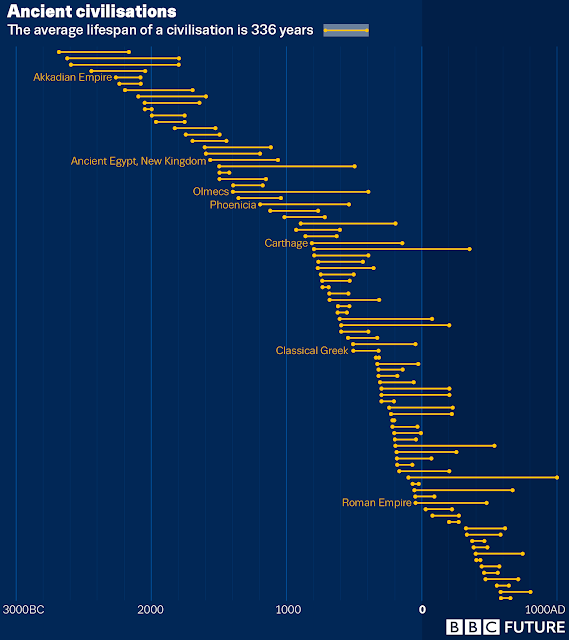 Collapse can be defined as a rapid and enduring loss of population, identity and socio-economic complexity. Public services crumble and disorder ensues as government loses control of its monopoly on violence.

Virtually all past civilisations have faced this fate. Some recovered or transformed, such as the Chinese and Egyptian. Other collapses were permanent, as was the case of Easter Island. Sometimes the cities at the epicentre of collapse are revived, as was the case with Rome. In other cases, such as the Mayan ruins, they are left abandoned as a mausoleum for future tourists.

Kemp maintains that the lessons of earlier, agrarian empires are relevant to our modern industrial civilization.  While we may view the idea of collapse as apocalyptic, Kemp and others argue that history reveals it's entirely normal.


Societies of the past and present are just complex systems composed of people and technology. The theory of “normal accidents” suggests that complex technological systems regularly give way to failure. So collapse may be a normal phenomenon for civilisations, regardless of their size and stage.

We may be more technologically advanced now. But this gives little ground to believe that we are immune to the threats that undid our ancestors. Our newfound technological abilities even bring new, unprecedented challenges to the mix.

And while our scale may now be global, collapse appears to happen to both sprawling empires and fledgling kingdoms alike. There is no reason to believe that greater size is armour against societal dissolution. Our tightly-coupled, globalised economic system is, if anything, more likely to make crisis spread.

What are the culprits, the usual suspects, behind civilization collapse. There are common threads. See if any of these sound familiar.

CLIMATIC CHANGE: When climatic stability changes, the results can be disastrous, resulting in crop failure, starvation and desertification. The collapse of the Anasazi, the Tiwanaku civilisation, the Akkadians, the Mayan, the Roman Empire, and many others have all coincided with abrupt climatic changes, usually droughts.

ENVIRONMENTAL DEGRADATION: Collapse can occur when societies overshoot the carrying capacity of their environment. This ecological collapse theory, which has been the subject of bestselling books, points to excessive deforestation, water pollution, soil degradation and the loss of biodiversity as precipitating causes.

INEQUALITY AND OLIGARCHY: Wealth and political inequality can be central drivers of social disintegration, as can oligarchy and centralisation of power among leaders. This not only causes social distress, but handicaps a society’s ability to respond to ecological, social and economic problems.

COMPLEXITY: Collapse expert and historian Joseph Tainter has proposed that societies eventually collapse under the weight of their own accumulated complexity and bureaucracy. Societies are problem-solving collectives that grow in complexity in order to overcome new issues. However, the returns from complexity eventually reach a point of diminishing returns. After this point, collapse will eventually ensue.

EXTERNAL SHOCKS: In other words, the “four horsemen”: war, natural disasters, famine and plagues. The Aztec Empire, for example, was brought to an end by Spanish invaders. Most early agrarian states were fleeting due to deadly epidemics. The concentration of humans and cattle in walled settlements with poor hygiene made disease outbreaks unavoidable and catastrophic. Sometimes disasters combined, as was the case with the Spanish introducing salmonella to the Americas.

RANDOMNESS/BAD LUCK: Statistical analysis on empires suggests that collapse is random and independent of age. Evolutionary biologist and data scientist Indre Zliobaite and her colleagues have observed a similar pattern in the evolutionary record of species. A common explanation of this apparent randomness is the “Red Queen Effect”: if species are constantly fighting for survival in a changing environment with numerous competitors, extinction is a consistent possibility.

Let's go back to pictures. Kemp offers this graphic. 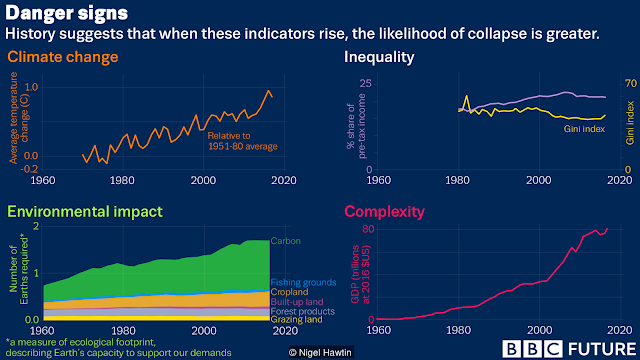 That's not looking very good, is it?

Offsetting these gloomy indicators, Kemp argues are a few good things we have going for us. He cites global economic diversity and innovation as enhancing the resilience of nations to weather the forces of collapse.

There are some reasons to be optimistic, thanks to our ability to innovate and diversify away from disaster. Yet the world is worsening in areas that have contributed to the collapse of previous societies. The climate is changing, the gap between the rich and poor is widening, the world is becoming increasingly complex, and our demands on the environment are outstripping planetary carrying capacity.

The author concludes that our fate, grim as it may appear, is in our hands. There is much we can change, perils we can avert, if only we have the stomach to save ourselves.


The collapse of our civilisation is not inevitable. History suggests it is likely, but we have the unique advantage of being able to learn from the wreckages of societies past.

We know what needs to be done: emissions can be reduced, inequalities levelled, environmental degradation reversed, innovation unleashed and economies diversified. The policy proposals are there. Only the political will is lacking. We can also invest in recovery. There are already well-developed ideas for improving the ability of food and knowledge systems to be recuperated after catastrophe. Avoiding the creation of dangerous and widely-accessible technologies is also critical. Such steps will lessen the chance of a future collapse becoming irreversible.

We will only march into collapse if we advance blindly. We are only doomed if we are unwilling to listen to the past.

Ask yourself where is the political will so critical to implementing the changes needed to stave off collapse?  It certainly isn't to be found in the ranks of the Tory troglodytes. Unfortunately there's precious little political will for change among the Liberals either.

Thanks for the source, Mound. It's interesting that some civilizations have avoided collapse. Apparently, it's not inevitable.


It's not inevitable, Owen, if only we have the political will to steer society clear of the shoals.

Where are we to find that sine qua non, political will? Climate change is just one of the challenges that must be met. Environmental degradation, inequality and the blind pursuit of perpetual exponential growth, i.e. complexity, must likewise be addressed.

As I wrote again quite recently, all of these challenges, each lethal if unchecked, are just symptoms of a greater disorder, our refusal to live within the finite limits of our planet, our biosphere.

Another expert on collapse, Jared Diamond, warns that with this accumulation of existential threats you must either find the means to address all of them or you'll fail to solve any of them.

The solution is as obvious as it is comprehensive but where are we to find the political will to implement it?

Anon, I read the Wikipedia review. A bit abbreviated. Have you read the book? Any thoughts to add?

Nice find.
The broadcast arm of the BBC is as dismal as the current bile served up by the CBC. Interesting that the rot has yet to infect the whole corporation.

It seems to me that our giant civilization is presently based on fossil fuels. Which are: a) polluting, and b) non-renewable.

We use the easily extracted oil first, then use the bitumen and fracking next.