What Is It With Scumbags and Proroguing Parliaments? 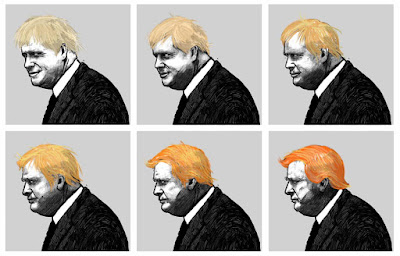 Who can forget how Stephen Harper, aided and abetted by a dim and spineless Governor General, pulled his fat out of the fire by proroguing Parliament as the 2007/2008 Great Recession rolled over the world. Canada was beset by another hapless Liberal leader those days, one Michael Ignatieff, who decided he had nothing better to do over the weeks of that suspension and the ensuing Christmas holiday than to finish off a book about his maternal line, the Grants. You read it? Didn't think so.

Across the pond the Brits have a similar constitutional thug, Boris Johnson. What's his excuse, his crisis? Brexit and a halloween deadline. Harper didn't want Parliament getting up to no good while he wrestled with an economic disaster he somehow didn't see coming.  Johnson likewise has Westminster under house arrest while he tries to browbeat the European Union into submission.

The Euros do not seem to be impressed.


The European parliament’s coordinator on Brexit, Guy Verhofstadt, said the move was unlikely to deliver a stable future relationship. “‘Taking back control’ has never looked so sinister,” he wrote. “As a fellow parliamentarian, my solidarity with those fighting for their voices to be heard. Suppressing debate on profound choices is unlikely to help deliver a stable future EU-UK relationship.”

Unlike that Liberal leader's farcical performance there are signs that Johnson's opposition MPs, including a few Tories, won't waste the next five weeks but may return prepared to put the Conservative government down.

So what is Johnson's game? The director of the Institute for Public Policy Research, Tom Kibasi, writes that Boris is getting prepared to call out Britain's own deplorables:


This is a government that intends to realign Britain to the US and is set to govern just like US Republicans – cut taxes first, then maintain spending to blow up the deficit before using that to justify far deeper spending cuts.

So why would the public believe what Johnson says? The real secret of populists, from Donald Trump to Matteo Salvini to Johnson, is the conflation of transgression with truthfulness. The willingness to engage in bigotry and violate hard-won social norms against racist, homophobic or misogynistic language convinces people that these politicians “speak their mind” and “say what they think”. Paradoxically, their lack of virtue confirms their veracity.

Their bigotry is the result of calculation rather than miscalculation – and the predictable howls of outrage from critics only serves to amplify the message. The upcoming election will turn on whether Johnson is found out for what he is: Trump with a thesaurus, whose real agenda of a Brexit for the elite is disguised behind the thin veneer of a few spending announcements that come after a desperate decade of the degradation of Britain at home and abroad.

Cameron ran an austerity government from 2010 of some outright mean-ness before arranging the Brexit vote. It appears that Kibasi has decided to overlook that fact, which strikes me as odd - he runs a leftie think tank. May continued austerity - the Queen was more concerned than May over the Grenfell Towers fire, and bugger all has been done since about over 200 remaining council buildings with the dangerous cexterior cladding, despite Tory promises.

So Boris doing the usual right wing thing (like Pallister, Kenney, Schmoe and Ford and Trump the Chump) of more austerity based on ludicrous but established horse manure policies starting with tax cuts for the privileged isn't new in any way whatsoever. Perhaps Boris will just be even more dopey than even the usual right wing twat. Uh, correction, he already is in his self-aggrandizing full o'crap Borishness.

I wonder what his grades were while attending Eaton? XX

"The willingness to engage in bigotry and violate hard-won social norms against racist, homophobic or misogynistic language convinces people that these politicians “speak their mind” and “say what they think”."

If the whining libs and snowflakes who form the bulkhead of the "remain" campaign hadn't spent the last several decades sanitising everything but their own mouths, perhaps those so-called "social norms" wouldn't be quite the platform they now form? If the remain campaigners weren't such a box of hypocrites, then perhaps it wouldn't be so easy to point it out?

The parliament is supposed to be the "voice of the people", but the 78% of them who voted remain abuse their position to sabotage the process their people voted for and weakened the negotiating position from day one - purposefully. The EU is not what Britain voted to join 4 decades ago as for example it could not have made the statement Juncker made last week that the "EU would erect a hard border in Ireland"... sorry? the EU is going to do this … ah yes... on the "EU's" sovereign territory claimed by stealth paper and ink without a single sword stroke. They have done well for themselves and can utilise the sellout Irelands border as a weapon - the same Ireland who are a net contributer of literally - absolutely nothing - to EU funding, which instead they are trying to gouge out of Britain as a farewell gesture of goodwill whilst offering literally nothing in return - and branding it a "deal". Other countries have perfectly reasonable trading agreements with EU members and ironically Ireland has shrugged off the tax rules since the very beginning without any penalty let alone paying a penny for the privilege.

The remainers are not champions of all that is good and right - neither are the EU - and those hard won social norms are great, IF you enjoy living in this self destructive totalitarian uneducated fear driven by fake news snowflake generating car crash