China's "Century of Humiliation" And Why It Matters. 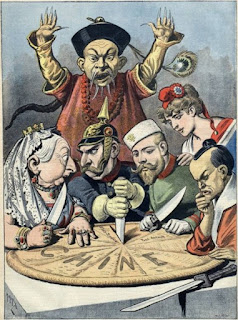 I'm regularly astonished at the reaction I receive when I mention the militant nationalism flourishing within China's military establishment, stoked by the perceived need to avenge what they call China's "century of humiliation."

Few in the West have the slightest idea of how Britain and her allies suppressed the Chinese and laid low their once powerful nation (along with India).

Eduardo Galeano, who died a few months ago, wrote this very eloquent summation of what China endured at the hands of the West that helps explain the bellicosity of China's military leadership today.  We ignore this at our peril.  The West's (i.e. Washington's) ongoing attempts to contain China and prevent it from establishing a sphere of influence in its own backyard are dangerously provocative in a time of shifting balances of power. 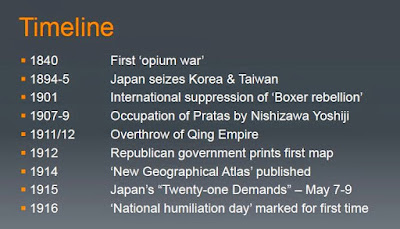 Opium was outlawed in China.

British merchants smuggled it in from India. Their diligent efforts led to a surge in the number of Chinese dependent on the mother of heroin and morphine, who charmed them with false happiness and ruined their lives.

The smugglers were fed up with the hindrances they faced at the hands of Chinese authorities. Developing the market required free trade, and free trade demanded war.

William Jardine, a generous sort, was the most powerful of the drug traffickers and vice president of the Medical Missionary Society, which offered treatment to the victims of the opium he sold.

In London, Jardine hired a few influential writers and journalists, including best-selling author Samuel Warren, to create a favorable environment for war. These communications professionals ran the cause of freedom high up the flagpole. Freedom of expression at the service of free trade: pamphlets and articles rained down upon British public opinion, exalting the sacrifice of the honest citizens who challenged Chinese despotism, risking jail, torture, and death in that kingdom of cruelty.

The proper climate established, the storm was unleashed. The Opium War lasted, with a few interruptions, from 1839 to 1860.

The sale of people had been the juiciest enterprise in the British Empire. But happiness, as everyone knows, does not last. After three prosperous centuries, the Crown had to pull out of the slave trade, and selling drugs came to be the most lucrative source of imperial glory.

Queen Victoria was obliged to break down China’s closed doors. On board the ships of the Royal Navy, Christ’s missionaries joined the warriors of free trade. Behind them came the merchant fleet, boats that once carried black Africans, now filled with poison.

In the first stage of the Opium War, the British Empire took over the island of Hong Kong. The colorful governor, Sir John Bowring, declared:

“Free trade is Jesus Christ, and Jesus Christ is free trade.”
Outside its borders the Chinese traded little and were not in the habit of waging war.

Merchants and warriors were looked down upon. “Barbarians” was what they called the English and the few Europeans they met.

And so it was foretold. China had to fall, defeated by the deadliest fleet of warships in the world, and by mortars that perforated a dozen enemy soldiers in formation with a single shell.

In 1860, after razing ports and cities, the British, accompanied by the French, entered Beijing, sacked the Summer Palace, and told their colonial troops recruited in India and Senegal they could help themselves to the leftovers.

The palace, center of the Manchu Dynasty’s power, was in reality many palaces, more than 200 residences and pagodas set among lakes and gardens, not unlike paradise. The victors stole everything, absolutely everything: furniture and drapes, jade sculptures, silk dresses, pearl necklaces, gold clocks, diamond bracelets... All that survived was the library, plus a telescope and a rifle that the king of England had given China 70 years before.

Then they burned the looted buildings. Flames reddened the earth and sky for many days and nights, and all that had been became nothing.

Lord Elgin, who ordered the burning of the imperial palace, arrived in Beijing on a litter carried by eight scarlet-liveried porters and escorted by 400 horsemen. This Lord Elgin, son of the Lord Elgin who sold the sculptures of the Parthenon to the British Museum, donated to that same museum the entire palace library, which had been saved from the looting and fire for that very reason. And soon in another palace, Buckingham, Queen Victoria was presented with the gold and jade scepter of the vanquished king, as well as the first Pekinese in Europe. The little dog was also part of the booty. They named it “Lootie.”

China was obliged to pay an immense sum in reparations to its executioners, since incorporating it into the community of civilized nations had turned out to be so expensive. Quickly, China became the principal market for opium and the largest customer for Lancashire cloth.

Then China was invaded by Japan. Conquest was not difficult. The country was drugged and humiliated and ruined.

The history of British exploitation and subjugation of India is scarcely better.  At the time of their conquest, China and India were the first and second largest economies in the world.  Britain showed a friendlier face to India and brought the country into its empire.  China received none of that solicitous engagement.  The "humiliation" was very much alive right up until the British finally returned Hong Kong.

I think we're entering perilous waters if we ignore this history or dismiss it, demanding that China let bygones be bygones.  That's the sort of thing you can do or say to small countries with some impunity.  It's a different thing altogether when the country with the scars and profound grievances is the emerging superpower.

I have often wondered if one of the principal reasons for the US invasion of Afghanistan was that the Taliban had stopped heroin production. Are addictive drugs always at the heart of free trade? Does the US actively play both sides of the drug war, encouraging free trade and fighting drug use?

Yes, needling China in their own sphere is stupid but America thrives on belligerence.

I can't see the opium motive you suggest, Toby, but oil was certainly on Cheney's mind. Before becoming veep, Cheney was CEO of Haliburton. In his corporate capacity he lobbied to have the Talibs taken off America's supporters of terrorism list hoping Kabul would give Haliburton approval to construct and operate the TAPI, trans-Afghanistan-Pakistan-India pipeline, to funnel Caspian Basin oil through Afghanistan and Pakistan to India for shipment to Europe. TAPI was intended to keep those massive oil and gas reserves out of Russian hands.

Haliburton/Unocal even feted the Afghan leadership at its headquarters in Sweetwater, Texas.

As for provoking China, it's always a stupid idea to get in the face of someone with a thermonuclear chip on his shoulder. If you want to know how brazen America is at playing this game, Google "Operation Chimichanga." Nothing like staging a full dress rehearsal of a first strike surprise attack and letting the intended target read all about it.

Anyong said......What surprises me is how Asians want to relocate to America Especially South Korea. Most of their contact is through the American Armed Forces especially those stationed in Yungsan in Seoul, South Korea where 37,00 US Army are based with several other Air Bases with about 10,00 US men. South Korea's economy is comparative with the US.

They must get quite a rude shock when they get here. Especially when South Koreans get their internet hooked up . . .
I do think this history is very important. But while there may be strains of it, I don't think the overall result is a China that's expansionist as such. Mostly a China that wants to be, as the Quebecois put it, "Maitres chez nous"--a notion unfortunately incompatible with American foreign policy, which does not allow the idea of nationalist governments. Also a China that wants to show the world how awesome they are and get respect. So they wanted the olympics, they wanna put a man on the moon, they want to do all the stuff the big countries get prestige from and then do some more stuff so they can go "Hah! We've taken the lead! Give us respect, dammit!" None of this is a huge problem in itself.

One problem is that, again, the US wants hegemony. And the US in the Pacific has long projected power by controlling commerce with its naval forces; think back to the prelude to WW II, when they were trying to strangle Japan by stopping them from getting oil (with some success). So now it seems the US wants to control the seas around China and potentially block, for instance, tanker traffic. They want to be able to strangle, or at least threaten to strangle, the Chinese economy via control of China's ocean trade lanes. The Chinese leadership not being dummies, they now feel that rather than just defending China itself from attack, they have to contest control over the trade lanes, setting them on the early steps of moving "self defence" outwards.
Meanwhile of course they're also trying to do an end run around such potential obstruction by vastly increasing land trade infrastructure, with pipelines and trains and such to form these "New Silk Roads". But then, they'll have additional stuff they've invested in that they'll feel some need to defend, and the Americans will be trying to nobble them.

People (everywhere) can endure anything&everything but humiliation.
Those in position of power tend forget about that simple truth.
Remember words of Chretien? "You cannot exercise your powers to the point of humiliation for the others. ... There are long-term consequences"
A..non

@ PLG - I don't think China is pursuing expansionism, not yet at least. If it came to that, Siberia would be the clear option but I don't think Vlad would be accommodating. That said, as a genuine emerging economic superpower China has a legitimate interest in consolidating its influence across its own immediate neighbourhood, an Asiatic Monroe Doctrine. Yet from the far side of the Pacific here comes the United States seeking to contain China, to bottle it up.

China is seemingly doing better at undoing America's influence. The entry of Pakistan and India into the Shanghai Cooperation Organization was a blow largely overlooked by the Western media. This after America's exertions to draw India onside as one of its pincers of Chinese containment, a blocking force to imperil China's sealane access to the Middle East. If its western flank is secured, resisting America becomes an exercise in area denial across the East China and South East China Seas which is reflected in the nature of China's military rearmament - new submarines, stealth fighters, medium-range "carrier killer" missiles, anti-sat weaponry. It's a force that seems purpose built for putting American hulls on the sea bed.

4 dead in Ohio.
http://globalnews.ca/news/2118358/man-fatally-shot-by-dawson-creek-rcmp-not-the-person-who-made-disturbance-at-site-c-event/
Canada out of control.

I can never get over Eunuchs and what they mean about China,