Harpo Called Out - By Suzuki 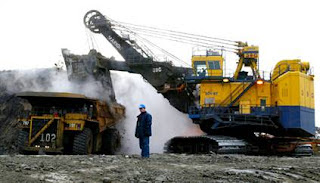 It's about time. Our Furious Leader has been called out into the street to defend his beloved tar sands and the notion that he's become an instant convert to environmentalism. David Suzuki yesterday told a gym full of Calgary elementary school kids and their parents that, when it comes to the environment, Harper is, well, a fraud.
The only thing he cares about is getting re-elected with a majority government," Suzuki said, adding any of the PM's pledges to preserve the environment are cynical ploys to that end.
"I don't believe there is a green bone in Harper's body - he has never, ever indicated he cares about the environment."
"Albertans have always had the highest standard of living in the country. Why do you need all this out-of-control expansion of the oilsands. It's insanity ... it's crazy."
The Athabasca Tar Sands (no, they're not "oil" sands) have been the 800 pound gorilla of Canadian politics. When it comes to pols, Libs included, there's a genuine reluctance to anger Alberta (and Washington) by pointing out the obvious.
I suspect Harpo will lay low on this one and wait for it to go away or hope that it grows into a Suzuki-Stelmach fight that he can duck until he sees his numbers in the next election. Either way, Harper has been tagged as a fraud and ducking this one is a clear admission of that.

suzuki has the right to free speech. If he feels that way about Harper and the govt, by all means, he should speak.

I have issues with the choice of venue.

You see nothing wrong with bringing that politically divisive message into a public school system??

I thought that public schools were supposed to be politically and religiously neutral?

What would be your reaction if some person on the right came in to talk with your children to tell them that your party (libs) wants power at all costs and does not care about them other than the votes they bring (or parents bring)?

Or if a pastor or reverend came in to negate evolution?

Since our schools are funded with taxpayer money, they should be politic and religion-free. Period.

And if any group came into my kid's school to talk about either (even if I agreed with the person's message), I would have a few choice words for the administration and the board.

The Edmonton Journal asked Dion about this (he was in Edmonton for the second time since becoming leader). Dion said he would not get between Stelmach and Suzuki, but took the opportunity to say a liberal government would not take Alberta's wealth, but that he would work with Alberta to create a sustainable economy.

It looks like the high priestess, David Suzuki, has lost his mind. He is now ranting and raving his partisan politics in front of a group of elementary school kids. Incidents like these will make it difficult for anyone to take him seriously.

I see your point, Tori, about the suitability of a public school for Suzuki's blast. You can be derisive,Tony, but it's not Suzuki's credibility in question here but our Furious Leader's. The more attention brought to the Tar Sands the better. It needs to be brought out into the light of day and not just on CO2 either. Harpo can't claim to be a believer and duck this one. Time he was honest with the Canadian people.

ummm...what the hell does David Suzuki have to do with pastors or reverends? Absolutely bizarre. Let's not get into the US realm and start viewing our PMs as untouchable godlike beings that we cannot talk against. Please.