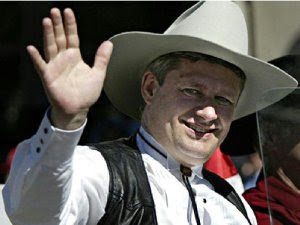 Leopards don't change their spots but snakes sure do shed their skins and so does our Furious Leader, Harpo. His old scales were damaged when he refused to attend the World Aids Conference in Toronto. The two-legged viper looked positively homophobic. There's one you can't afford to have hanging around your neck with an election looming.

What to do? How 'bout throwing some of that cash the Libs conveniently left you for a photo-op about AIDS?

The Harpster got with the programme yesterday announcing federal funding to the tune of $111-million to help build a research facility and assist researchers looking for a vaccine for AIDS. The Gates Foundation is topping that up with a further $28-million.

he could have done this during the AIDS Conference. He's only doing this now because Canadians are angry with him about that and knows it will be a "vote buyer".