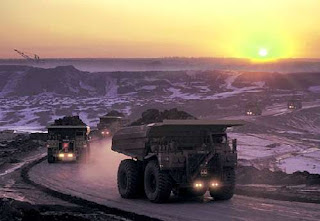 If there's one thing Harpo and Special Ed don't like to mention, it's the environmental nightmare of the Athabasca Tar Sands. Thanks to the tar sands, Canada is now considered to have the second largest oil reserves in the world behind only Saudi Arabia and, unlike those distant and unstable Arabs, Canada's oil is secure and right on America's doorstep.
The Tar Sands have caught the attention of Alternet.Org which has published one of the most comprehensive and comprehensible articles I've ever read on the subject. Here are a few facts from that piece:

Canada exports 66 percent of its domestic crude oil production, and since 1995 the United States has received 99 percent of these exports.
The tar sands deposits underlie more than 140,000 square kilometers of relatively pristine boreal forest, an area larger than the state of Florida.
Tar sands consist of a mixture of 85 percent sand, clay, and silt; 5 percent water; and 10 percent crude bitumen, the tarlike substance that can be converted to oil. Bitumen doesn't flow like crude oil, and getting it out of the tar sands is a messy job. ...Imagine mixing a bucket of roofing tar into a child's sandbox. Then boil some water, pour it into the sandbox, and try to wash the tar out of the sand.
Most tar sands production takes place in vast open-pit mines, some as large as 150 square kilometers and as deep as 90 meters. Before strip-mining can begin, the boreal forest must be clear-cut, rivers and streams diverted, and wetlands drained. Four tons of material are moved to produce every barrel of bitumen.
Once separated from the sand, the bitumen is still a low-grade, heavy fossil fuel that must undergo an energy-intensive process to upgrade it into a synthetic crude oil more like conventional crude, either by adding hydrogen or removing carbon.
...producing a barrel of synthetic crude oil from the tar sands releases up to three times more greenhouse gas pollution than conventional oil. This is a result of the huge amount of energy (primarily from burning natural gas) required to generate the heat needed to extract bitumen from the tar sands and upgrade it into synthetic crude. The energy equivalent of one barrel of oil is required to produce just three barrels of oil from the tar sands.
Regulations introduced in early 2007 are so fraught with loopholes and gaps that greenhouse gas pollution from tar sands is predicted to triple by 2020.
Satellite images readily illustrate the magnitude of boreal forest impacts from tar sands mining operations. The United Nations Environment Program has identified Alberta's tar sands mines as one of 100 key global "hotspots" of environmental degradation.
Very little of the area directly affected by mining operations has been reclaimed, and after 40 years of mining, not a single operation has received a reclamation certificate from the government of Alberta.
Tar sands mining operations withdraw 2-4.5 barrels of fresh water from the [Athabasca] river for every barrel of oil they produce. Current operations are permitted to withdraw more than 349 million cubic meters of water per year, a volume equivalent to the amount required by a city of 2 million people. But unlike city effluent waters, which are treated and released back into the river, tar sands mining effluent becomes so contaminated that it must be impounded.
Both tar sands mining and in situ operations produce large volumes of waste as a result of their water use. For in situ operations, the primary waste stream, a result of treating salt water and the water that is pumped up with the bitumen, is disposed of in landfills or injected underground. Tar sands mining operations present a much more significant risk, because they produce large volumes of waste in the form of mine tailings (six barrels of tailings per barrel of bitumen extracted). These tailings, a slurry of water, sand, fine clay and residual bitumen, are stored in vast wastewater reservoirs.
The industry misleadingly refers to them as "tailings ponds," but collectively these pools of waste cover more than 50 square kilometers and are so extensive that they can be seen from space. One tailings pond at Syncrude's mining operation is held in check by the third-largest dam in the world. These tailings dumps pose an environmental threat resulting from the migration of pollutants through the groundwater system and the risk of leaks to the surrounding soil and surface water.
Tar sands air pollution, both provincial and transboundary, is rapidly increasing. Since 2003 Alberta has been the industrial air pollution capital of Canada.
The tar sands industry is now focused on quintupling production as quickly as possible. It is projected that tar sands production will reach 3-4 million barrels per day by 2015 and could grow to 5 million barrels per day by 2030, if not sooner. It is the prospect of this growth that has led Canadian Prime Minister Stephen Harper to label Canada an "emerging energy superpower."
The environmental and global warming consequences of even 1 million barrels per day of tar sands production must serve as a wake-up call, and we must acknowledge that increased reliance upon this unconventional, high-impact fossil fuel is not a viable path forward.

Stephen Harper now likes to depict himself as environmentally conscious and absolutely dedicated to the fight against global warming. Until he deals with the environmental disaster that is the Athabasca Tar Sands, he's just another goddamned liar.
Posted by The Mound of Sound at 9:59 AM

Did the tar sands just appear in the last 2 years? Why didn't you get this excited 8 years ago when the Cretch was signing Kyoto?
You are a left-over hippi tree-spiker I suspect . . .
Why not write about the nickle mine and smelter in Ontario that blights the landscape to produce nickle for ni-cad batteries for the Prius and others. Their so-called carbon footprint is bigger than driving a Hummer for a year . . . before the Prius ever leaves the dealers lot!!! But, not a word from the enviro-wacked-lefties.
Less than 1 degree Celcius in 100 years does not get me too concerned, I am much more concerned about the generations of illiterates we have been turning out of our schools and universities for the last 20 years or so.

Old School, you truly are pathetic. What gets you concerned is irrelevant.

Mound . . . spoken like a true believer at the church of GW!
Twenty years from now I will be driving my internal combustion powered car or truck. Of course the poor folks will be riding bikes, walking or taking the bus, cause the cost of "Carbon-trading" will keep them off the road. Algore will make billions and run for president.
By about 2025 or so, it will be time for another "Ice Age Scare". This will prove to the ignorant masses that "Carbon Trading" was a huge success, and so on and so on.
Have another glass of kool-aide!!!

But with all the illiterates and idjots that we've churned out of the schools and universities, how else would you expect Harper to be in office?

Old School, before you point yer shaky boney finger, are you writing about all this things you say are being overlooked? Perhaps not? I'm glad there is some critique over what is going on right here, right now. It is an issue.

Enna says...Mound...just tone it down a tad..okay? There are some very valid comments about other issues going on in this country. Continually writing about Afghanistan and Alberta is a bit obssessive even though you have a right to your opinion with facts provided. There really are other as important issues as oldschool has mentioned. Cheers with a little sunshine.