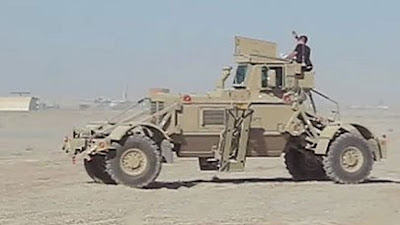 This is Canada's latest attempt to respond to the ever-increasingly large improvised explosive devices used by the Taliban insurgents in Afghanistan. It's a mine detection vehicle from South Africa called the "Husky", not to be confused with a light armoured vehicle of the same name also operated by our army.

In the few years Canadian forces have been in Afghanistan, they've gone through several vehicle upgrades. 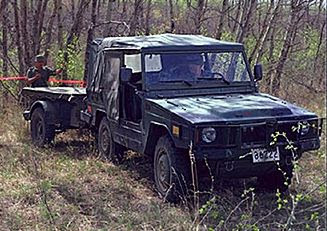 When we were tooling around the streets of Kabul in the early days, Canadian soldiers often travelled in these mini-jeeps known as the Itlis. If it looks like it might have been created by Volkswagen, it was. The unarmoured Itlis was built for the Canadian army by Bombardier. it quickly showed itself unsuitable for combat conditions in Kandahar.

The Itlis was soon replaced by the lightly armoured, Mercedes G wagon. At the time it was thought it would provide our troops with an adequate level of protection. 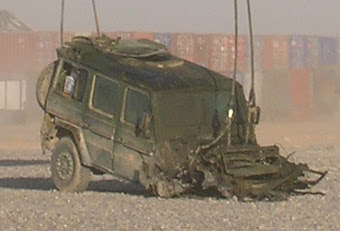 That didn't last long as the G-Wagon was found just too vulnerable to mines although this one did save the lives of its occupants. 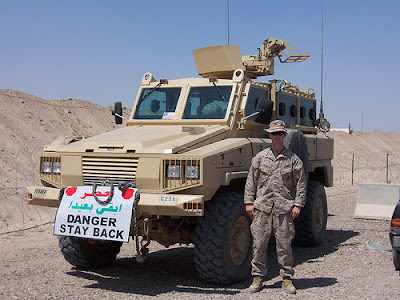 Next up was the South African Nyala, a much sturdier vehicle designed specifically to deflect and survive mine blasts. 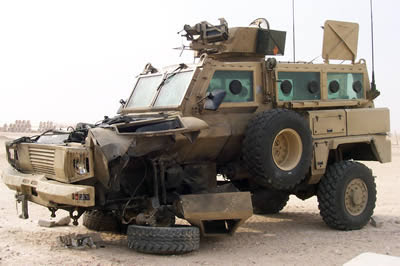 In response to the introduction of heavier armour, the insurgents responded with larger mines. This Nyala was taken out by one of those larger weapons. Fortunately, in this case, the crew survived. They weren't always that lucky.

Enter the Husky mine clearance system, again from South Africa. The Husky travels on balloon tires which, so the theory goes, create a much lower surface pressure that allow the vehicle to pass over mines. The Husky tows trailers behind it whose sole purpose seems to be to detonate the mines. A similar Husky system has a recovery vehicle that collects the destroyed trailers.

As far as these things go, I'm all for them. We owe it to our soldiers in Afghanistan to get them the very best, the very safest vehicles that we can lay our hands on.

What bothers me about these vehicles is that they reveal the dilemma of trying to fight a counterinsurgency campaign with an inadequate number of troops. It leaves our soldiers so vulnerable outside their bases that they have to travel in great, lumbering convoys of enormous, strange-looking vehicles.

Remember, the Taliban are waging a political war, a war for the "hearts and minds" of the peasants. We're giving them carrots (at least when we're not bombing them into oblivion) while the Taliban are beating them with sticks. When we can't keep the Taliban out of their villages, it's a simple decision who they'll be siding with.

The very things that protect us undermine the confidence the villagers place in us. They're already afraid and in our own way we're telling them we are too.

You really don't give up do you? Would you prefer that Canadian troops not have adequate protection from roadside bombs? Please clarify...

hey mound - seems your posts are getting sean's panties in a knot. I didn't read anywhere where the post said you didn't feel they should have adequate protection - seek clarification by reading a lower slower.

I wear a thong... still waiting for clarification.

Sean, did you even bother to read what I wrote before asking whether I would prefer Canadian troops not have adequate protection:

"As far as these things go, I'm all for them. We owe it to our soldiers in Afghanistan to get them the very best, the very safest vehicles that we can lay our hands on."

I think that statement speaks for itself, Sean. What's your point?

>>What bothers me about these vehicles is that they reveal the dilemma of trying to fight a counterinsurgency campaign with an inadequate number of troops. It leaves our soldiers so vulnerable outside their bases that they have to travel in great, lumbering convoys of enormous, strange-looking vehicles. <<

Given that Afghanistan has been occupied by foreign armies for the better part of the past thirty or so years, I suspect the residents are quite used to enormous, strange looking vehicles.

That depends on who the message is directed at and if, there is any message at all. What I read into this is that the troops need better kit. Period. From your last sentence, I take it you're advocating then for a significant troop increase, right?

You post a lot of stuff about Afghanistan and believe me, I've read much of it. I'm not entirely sure what it is you're advocating for. A complete withdrawal? A withdrawal by January 2009?

What do you want?

I can tell you what I advocate for. More troops from other NATO countries. A continuation of Canada's role in the ground war. Securing larger sectors of Afghanistan. Building an effective Afghan army that can defend itself against the Taliban. Developing effective rebuilding projects under the auspices of CIDA and the UN. I'd even like to see a UN Peacemaking force get involved. This is, after all, a UN sanctioned mission.

Sean, I don't believe this "war" is winnable. There is no military solution, even the best generals admit that. Ethnically you're dealing with Pashtun, Uzbek, Tajik, Hazara, Turkmen, Nuristani and Balochs. You can't herd that many cats with a weak boss like Karzai. The Pashtun are the biggest tribe and the Taliban are their home team. After 9 innings the visiting team gets on the bus to go home, the home team stays put.

However, if we are going to stay we need a greatly expanded force to provide minimal security in Kandahar province and our allies need to provide vastly more forces to secure Helmand and Oruzgan provinces, the other two hot points.

There are just shy of 900,000 people in Kandahar, our turf. That needs a force of 22,500 counterinsurgents (combat riflemen), at least according to the best and the brightest. With a battle group of 1,000 the best we can do is run patrols, and that's just trolling with our soldiers as bait. Look at the progression in vehicles we've had to go through just to try to survive the increasingly powerful weapons being deployed against our people.

This whole business is stagnating. Karzai is probably weaker now than when the US first put him in. The power vacuum in the countryside has now been filled by warlords, drug lords and insurgents. Feudalism has become dominant, not anything resembling Western democracy. Even on the floor of their legislature women MPs are threatened with rape by their male colleagues if they speak out. Afghanistan has become FUBAR.

But, if we're going to stay at least do it right. The rule is "go big or go home" and we sure as hell haven't been going big so we might just as well go home.