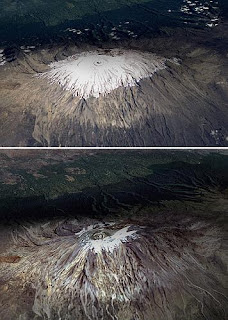 Despite the current focus on AGW, or man-made global warming, we're facing a host of environmental challenges and threats. Yet even on what may be one of the simplest to quantify and redress, carbon emissions, our leaders inevitably lapse straight into gridlock. At the national and global levels we're confounded by failures of group decision-making. Despite what you may think, this is nothing new to the experience of man. There is plenty to learn from the past and no time like the present to take a hard look at these lessons.

UCLA prof Jared Diamond has studied these failures of group decision-making and lumps them into four categories:

"First of all, a group may fail to anticipate a problem before the problem actually arrives. Second, when the problem does arrive, the group may fail to perceive it. Then, after they perceive it, they may fail even to try to solve it. Finally, they may try to solve it but may not succeed. ...Perhaps if we understood the reasons why groups often make bad decisions, we could use that knowledge as a checklist to guide groups to make good decisions."

"Perhaps the commonest circumstance under which societies fail to perceive a problem is when it takes the form of a slow trend concealed by wide up-and-down fluctuations. The prime example in modern times is global warming. ...as we all know, climate fluctuates up and down erratically from year to year. ...With such large and unpredictable fluctuations, it has taken a long time to discern the average upwards trend of 0.01 degree per year within that noisy signal.

Old people like to reminisce about the old days when they were young. I used to feign interest while putting my mind on the back burner. Now I listen and, better yet, I ask pointed questions. What was the air like back then? What was the water like when they had to pump it out of the ground by hand? What was the summer sun and the winter cold like in those days? When you actually get them focused on what life was like in the 1920's it's astonishing how much they remember and the clarity of their recollections. Astonishing but also very unsettling when you realize they're describing an environment that no one is likely to enjoy again for centuries to come.
Posted by The Mound of Sound at 8:24 AM