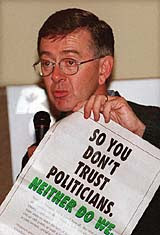 Remember Manning's vision embraced in his Reform Party? Grassroots, participatory democracy. Government of the people, by the people, for the people - writ large. His government was one that would do the people's will.
Now we have Manning's protege, esconced in 24 Sussex Drive, running the most top-down, secretive, autocratic government Canada has seen in at least half a century. Recent studies have shown Harper's agenda to be on the wrong side of public opinion on nearly everything. This is a guy governing despite the people's will.
Manning has to say nice things about Harpo, he really doesn't have a lot of choice. But what must he be thinking? First he spawned the laughably hapless Stockwell Day, now it's Harper.
Posted by The Mound of Sound at 11:16 AM

Whooee! Yessirree, Harpoon's a populist who don't trust the people. I reckon he's playin' to please his base. They're bowin' down to him and cheerin' great leadership on the isotope fisaco and his hard-nosed anti-earth actions in Uganda and Bali. His hardcore base loves him more than ever.

All's he needs to do is convince about 7% more of the scant 60% who bother votin' to vote Con. The only grassroots he needs to worry about are his base. If 60% of the population disagrees with him, that's not his problem. 40% equals a majority in FPTP land.

When yer in power and you hold the purse strings and get all the free publicity you want, boostin' yer support by a few percent shouldn't be too tough. Especially, when yer spendin' $31 million to see how to get votes.

Mound wrote: "Recent studies have shown Harper's agenda to be on the wrong side of public opinion on nearly everything."

Studies? Surely you meant "polls". A link would be nice too.

Sorry Lance, I don't have the link. It was a Canadian Press story and I'm sure you can find plenty of references to it at either Liblogs or Progressive Bloggers.