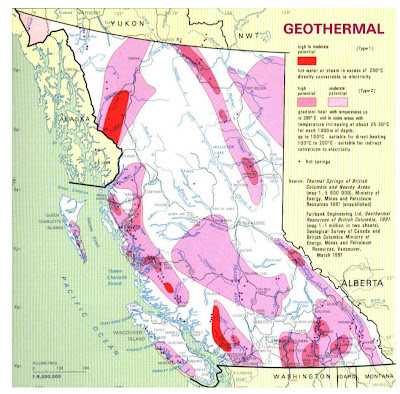 Coal, oil and gas - their days are numbered. They're non-renewable and, especially in the case of coal and oil, really dirty. One part of Canada, which conveniently just happens to be my part, is blessed with another source of limitless, clean and relatively cheap energy - geothermal. It's the upside of being part of the Pacific "Rim of Fire."
When gas prices were cheap (back when George w. Bush was first appointed monarch), government and industry dragged their heels on developing this resource. Times change and, if you've noticed, so do prices at the gas pump.
The map shows BC's geothermal resource belts and the red swathes are the prime territory for letting our own planet earth get us off the fossil fuel habit. Studies show that it's a win-win-win proposition.
The US Department of Energy reports that geothermal electricity comes in at under 4 cents per kWh compared to between 5-6 cents for wind and 7-8.5 cents for biomass energy. Recent technology advancements have dropped geothermal costs by close to 25% and a further 20% drop is forecast by 2020.
Unlike wind power, geothermal provides a constant supply of energy and the existing technology is said to achieve a 95-98% efficiency. It's not affected by weather or climate changes.
Geothermal power provides a significant environmental advantage over fossil fuel power sources in terms of air emissions because its production releases no nitrogen oxides (NOx) or sulfur dioxide (SO2), and much less CO2 than fossil-fuelled power. The reduction in nitrogen and sulfur emissions reduces acid rain, and the reduction in CO2 emissions reduces the contribution to global climate change.
A typical 100 MW plant will reduce CO2 emissions by 600,000 tonnes/yr, and NOx and SO2 emissions by 120,000 tonnes/yr compared to a natural gas plant of equal size. (Western GeoPower Corp, 2003). Emission reductions would obviously be far greater yet when compared to oil or coal-fueled plants.
And whereas oil and natural gas prices are expected to keep increasing, geothermal is expected to become less expensive.
Two demonstration projects are now underway to establish the commercial viability of large-scale geothermal production. At one drill site, they're encountering subsurface temperatures of 275 C.
Posted by The Mound of Sound at 3:31 PM

Great post! I'm in the Fleetwood suburb of Surrey, and there are quite a few people who have geothermal heating here on our hillside. I'm getting ready for the conversion myself.

When I lived in Calgary there was an entire condo project on the South end of McLeod Trail (at Anderson Rd) which was run off geothermal heat.

It's time has come.

Hi WG. What are you folks using in Surrey, heat pumps? Most people looking for affordable winter-season heat over here still go to woodstoves (which Monbiot actually endorses).

Wouldn't it be great to see a major North American power grid operating on geothermal energy? It works in Iceland and the Phillippines of all places has the biggest geothermal system on the planet.

I, for one, would like to see our dependency on fossil fuels slashed to a small fraction of what it is today. We'll never be rid of it but, if we can show that we can live just fine without it, it would be a hammer blow to the fossil fuel industry and the organizations that feed off it.

This is completely off-topic - sorry - but thought I'd alert a few bloggers.

Attached is an article revealing how new immigration applications are on hold (and have been since February) - http://www.thestar.com/News/GTA/article/447173

With the green shift dominating the news, I almost didn't even see it. I am really surprised someone hasn't talked about this already. How insane to just stop processing applications while "awaiting" the priorities from the immigration minister's office.

Talk about great ways of throwing a wrench in a process while claiming to offer solutions. Sounds like they are really working on that immigration process backlog - not.