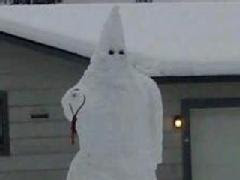 Some quirky people in Hayden, Idaho including the occupant of this house, a creep associated with the Aryan Nation, who built his own snowman complete with a KKK-style hat and a noose.   It's reported that the homeowner is a white separatist who handed out bullets at Halloween.  Apparently passersby knocked down the Klan hat and the occupant removed the noose after a visit from law enforcement officers.

I wonder what the guy thinks of Obama?
Posted by The Mound of Sound at 2:38 PM

What does this bigot's snowman have to do with Christmas?

You are one anti-christian racist.


Why do you hate so much?

An anti-Christian (learn to capitalize it, dummy)racist because I ridicule a racist. You're far more fucked up than I thought Deno.

"What does this bigot's snowman have to do with Christmas?"

Your headline links Christmas with the picture of a KKK snowman.

You have alot in common with the KKK snowman maker. The fact that you don't see it show that your IQ is no better then his either

BIGOT! (is that capitalized enough for you racist)

Sorry Deno but I don't have time to waste with Christo-fuckwits like you.

Wow! Your tolerance is over whelming!

For your info I am an Atheist. I do not believe in God, Jesus, Mohammed, or Allah. But unlike you I do not disrespect the people that do believe in God, Jesus, Mohammed, or Allah. The fact is I can’t prove that god doesn’t exist anymore then they can prove that god does exist. So my belief there is no god is based on faith just like Christian, Moslem, and Jews belief in god/allah is based on faith.

You obviously believe that to use name-calling like "Christo-fuckwits" is ok against certain people because they are not worthy of your respect.. Guess what? White Supremes think exactly like you do. You also assumed that since I called you out on your bigoted view of Christians that I must be Christian, in other word you stereotype me into a group you can comfortably be intolerant to. Again stereotyping people is exactly what a white Supremes does with people of different colors.

Do you not understand how hypocritical you are when you are comfortable to uses terms like "Christo-fuckwits" but complain about people that would use the “N” word to describe African Americans.

Not only are you a ignorant bigot but you are a hypocrite too.