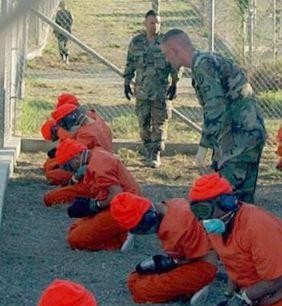 It's been called "pharmacologic waterboarding" and it may explain a number of suicides by captives held at Guantanamo.

Documents recently released by the U.S. Defense Department show that all terror prisoners at Guantanamo were required to take heavy doses of a controversial, anti-malarial drug, mefloquine.   They were administered doses only considered appropriate for those with active malaria.

Such heavy doses for those without malaria may cause, "potentially severe neuropsychiatric side effects, including seizures, intense vertigo, hallucinations, paranoid delusions, aggression, panic, anxiety, severe insomnia, and thoughts of suicide" according to US Army public health physician, Major Remington Niven.

Email ThisBlogThis!Share to TwitterShare to FacebookShare to Pinterest
Labels: Guantanamo

That is nasty - almost worse than physical torture. Mefloquine has pretty serious side effects even when someone has malaria. The person taking it needs a babysitter for the first 24 hours because of the severe paranoia and hallucinations.

Years ago, Information Clearing House released a statement from the US psychiatric association that condemned the US psychologist association for supporting and participating in abusive actions in Guantanamo. They called it a betrayal of medical ethics. Makes me wonder what doctors are on staff who agree to administer this type of torture.

Yep, nasty stuff indeed. I tried it as anti-malarial prophylactic about 10 years ago. I had to stop almost immediately due to the lack of emotional control and extremely disturbing dreams that ensued. A quick web search on Lariam yielded a first hit of "Lariam survivors". It scares me that we use this stuff on our military given the very well documented affects on mental stability.

@BY, thanks for the corroboration.

@Gulogulo - we're using this stuff on our own soldiers? As an anti-malarial prophylactic does it have to be taken repeatedly? Thanks for the info.

The dosing for me was something like weekly for 3 or 4 weeks before going to the malarial area and continuing while I was there. I don't know how long it needs to be taken to keep up resistance.

The side effects at prophylactic dosages are said to be rare, but that's a relative term. The problem is that malaria Plasmodium seems to be able to adapt quite quickly to drugs.

Here's a link to a Canadian Forces web page

that talks about some of issues raised about this in Somalia.