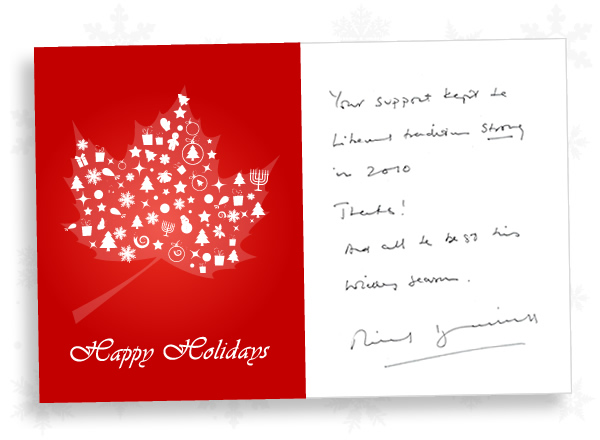 I got dropped from Iggy's real Christmas list last year so I was a bit surprised to get an e-card from the Igster today.  It's not actually a Christmas card as such.  It's a "Happy Holidays" card with all the baby Jesus stuff left out.   Wouldn't want to offend anybody while folks are celebrating the birth of our Lord and Saviour.   That wouldn't be right.   So let's be politically correct and keep religion out of it entirely except let's toss in a dandy pair of Menorahs!  Now I could be wrong.  There's a little figure in there and I think it's Caspar the Friendly Ghost or a snow-covered Charlie Brown.   Could that be the Baby J hisself?  Nah, he'd have that little halo thing wouldn't he?

In any case I was pleased to have Michael so openly thank me for keeping the Liberal tradition strong in 2010.   Well, Mike, somebody had to.   Lord know there wasn't much of it to be seen up on Parliament Hill.

And a merry, merry, merry to you and yours too Mike.
Posted by The Mound of Sound at 5:15 PM

Keep it. It could easily be the condensed copy of the littler red book.

"And all the best this Holiday Season".

Stop being mean to Iggy. I would vote for him or Layton, to get rid of Harper.