The Truth May Not Set You Free After All 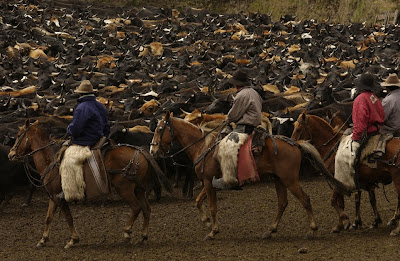 It isn't hard to conclude that FOX and its clones are in the business of warping public opinion by feeding misinformation to their audiences.   Of course that's pernicious, diabolical even, but aren't these uber-right propaganda mills running a grave risk of losing those audiences if and when they discover the truth and that they have been had?   Here's the worrisome part - they're not.

A previous study out of the University of Michigan by Brendan Nyhan and Jason Reifler found that the political misperceptions sown by outfits like FOX are extremely difficult to correct with factual information and, worse still, those who have been misled (brainwashed) may even deepen their misperceptions (dig in their heels) when presented with contrary, truthful information.  Nyhan and Reifler call this the "backfire effect."

When you couple the Nyhan/Reifler study to the University of Maryland research it pretty much erases any lingering doubt that some purported news outlets really are quite powerful misinformation agencies in service to some very anti-democratic interests.   They don't seek to inform merely from a particular partisan perspective but to confound, to confuse and mislead that segment of the electorate susceptible to their techniques.

We see the grotesque results of these techniques in the faces of the Tea Partiers or at Sarah Palin or Glenn Beck rallies.   When confronted with facts, clear truth, contrary to the misinformation they've been fed, they recoil angrily like vampires cast out into the noonday sun.   There you see the backfire effect in operation.   That is how you get blue collar workers riled up in support of tax cuts for the rich.   That is how you get ordinary people to see universal health care as an assault on their democratic freedoms.

Of course it's but a minority of the American public that is susceptible to this form of brainwashing.  The purveyors of this misinformation industry know that but, unlike the conservative Right that once coddled and colluded with them, the misinformers have always understood the enormous power of those they held in their sway.   David Frum referred to this when he quipped that the Bush Republicans thought that FOX News worked for them until they discovered that the tables had turned and they had come to serve FOX.

I suppose you can call it the "stampede effect" that we witnessed in full force in the 2008 mid-term elections.   The deliberately misinformed were herded into their own movement, the Tea Party, that rose up to capture several Republican congressional nominations from establishment candidates.   Faced with strong, Tea Party rivals, some, like John McCain, were compelled to jettison principle and integrity and adopt Tea Party platforms to save their political necks.

Of course you can't have a stampede without a herd of cattle and you can't form a herd without cowboys riding the range.   And, when it comes to this herd, the cowboys come with names like Hannity, Limbaugh, O'Reilly, Beck and Palin.  And of course the herd never suspects where the drovers are taking it - straight to the stockyards and slaughterhouses, the very abattoirs of democracy.
Posted by The Mound of Sound at 8:09 AM