Afghanistan bled the coffers of the Soviet Union in the past just as it bleeds the American treasury today.   The question is why America keeps banging away after a decade of a war that could easily go on for another two decades or longer?

Where's the reward?  What is America actually getting out of this?  Many years ago I asked a psychiatrist about an individual who exhibited what I considered irrational and self-defeating behaviours.  This person was reasonably well educated and moderately accomplished and, in most respects, quite rational.  The doctor explained that rational people can indeed do seemingly irrational things against their self interest.   The difficult problem was determining why.  People do what they do for what they get out of it, even though that can be real or imagined.

So what does the United States hope to get out of Afghanistan?  It won't defeat al Qaeda there.   Those guys have gone to Pakistan and destinations beyond.  If it wants to shoot al Qaeda guys it should move its army to Yemen.  The Taliban?  You can hold them at bay, sort of, but they're really just a tribal militia in a land packed full of tribal militias headed by warlords of incredibly flexible loyalties.  We set out to build a strong, central government defended by a strong national army and a strong national police service.  We did this despite the history of the place that only saw peace in a very loosely federated form.  Even the Bible says you can't build a house on sand.

So what's the payoff?  Who is keeping this war going and what are they getting out of it?  An article in The Guardian on the death of Richard Holbrooke suggests that his former boss, Secretary of State Hillary Clinton, has bought the Pentagon's position that the military campaign will work in the end.  She (and presumably her boss likewise) accepts General Petraeus' assurance that a little more banging away on the Talibs will motivate the rebels to negotiate in earnest.  That is breathtakingly simplistic yet that's the only answer short of outright lunacy that is consistent with America's posture toward Afghanistan.

So there it is in a nutshell.   America's strategy is "Whack a Mole."    The White House believes it can achieve a desired political outcome through military force.  Is it pure coincidence that our political objectives have steadily diminished even as our military force has escalated?

Remember what we went over there to accomplish?   We were going to destroy al Qaeda; crush the Taliban; establish a secular, Western-democracy complete with the essential core institutions - legislature, judiciary, bureaucracy, armed and police forces.   How well have we done so far?   We've got a rigged executive and legislative branch, a judiciary and bureaucracy that rival each other in corruption, a relatively hapless military and a positively predatory police force.  Oh yeah, I forgot to mention a narco-economy that fuels all of the institutions I just mentioned.  We're setting out to build an Afghan army that the Afghan government's treasury cannot begin to afford.   And we're going to force the Taliban to negotiate with whom exactly, for what, when?

So that's it.   That's what America hopes to get by prolonging its war.   It hopes to get out.   Well maybe Washington should simply cut to the chase and get out.  The only reason for staying on is if it results in a better outcome than we've achieved over the past decade.   We're like Charlie Brown and the military is like Lucy holding the football. 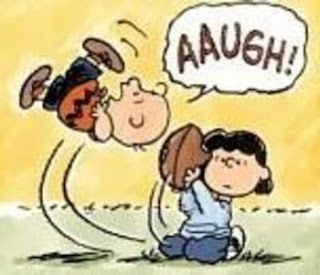 Here's what I think is going to happen.  Washington will drag this out for a few more years and leave a Potemkin Village of an Afghan state behind.  Then the neighbours will either intervene to broker a peace deal or the country will power up their unresolved civil war and go back at it, each side with its own sponsors.   One way or the other, South Asian problems won't be decided by anyone other than South Asians and certainly not by us.
Posted by The Mound of Sound at 10:06 AM