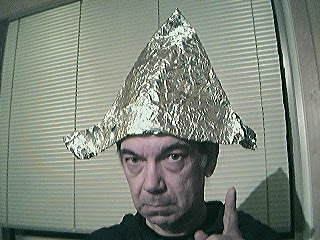 New research confirms the nutjob factor is alive and well among those who refuse to accept the reality of global warming.

People who endorsed conspiracy theories such as "9/11 was an inside job" and "the moon landings were faked", were also more likely to reject established scientific facts about climate change, such as "I believe that the burning of fossil fuels on the scale observed over the last 50 years has increased atmospheric temperatures to an appreciable degree."

...The findings provide yet more evidence that a rejection of climate science has more to with ideological views than scientific literacy, bolstering the well-supported finding that climate change scepticism is more likely to be found on the right, than on the left of politics. But they go a step further, adding an important layer of detail to the crude characterisation of climate change scepticism as a "conservative" issue.

The link between endorsing conspiracy theories and rejecting climate science facts suggests that it is the libertarian instinct to stick two fingers up at the mainstream – whatever the issue – that is important. Because a radical libertarian streak is the hallmark of free-market economics, and because free market views are popular on the political right, this is where climate change scepticism is most likely to be found.
Posted by The Mound of Sound at 11:51 AM