Hey Canada, Do You Really Want to Talk? 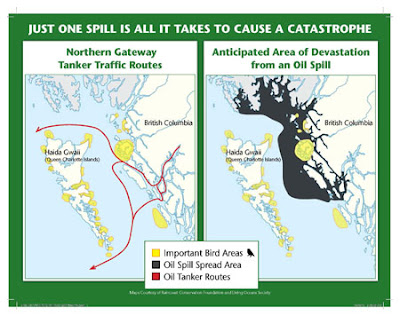 Having a conversation with a bitumen booster is like talking to a climate change denier.  It's impossible to have a broad-reaching discussion, covering all the bases.   That's because the Tar Sanders have some bases they want to bypass.   They want to narrow the conversation to play into their greatest strengths and ignore everything else.   And are they ever great at playing loose with facts.

Right now they've taken advantage of the B.C. premier's blunders and transformed the Northern Gateway debate into an issue of shakedowns and the constitution.   That lets them avoid discussing what really matters to pipeline opponents, the merits and perils of piping bitumen, or rather dilbit, at all.

The safety and environmental issues are swept aside with a nod.   Sure, fair enough, end of discussion.    They agree that the environment must be safeguarded but they don't want to talk about the reality of that problem.   They don't want to get into how Harper has effectively stripped the B.C. coast of Fisheries and Coast Guard monitors and defenders.   They don't want to explore this supposed oil spill response fleet of vessels that has been assembled; how it can operate only in good weather and calm seas (a relative rarity in the north) and how long it takes to deploy; or how the technology deployed is intended to be used on conventional oil spills and won't work on a bitumen spill.   They don't want to explain how anyone is going to deal with a heavily-laden tanker that loses power or steerage in a Hecate Strait storm where waves can reach 30-meters in height.  They don't want to talk about the closest, ocean-going tugs capable of handling a laden, supertanker failure being based in Anacortes, Washington, three to four days sailing, in good conditions, to northern B.C. They don't want to get into the pipeline operator, Enbridge's sullied and extensive safety record.   They don't want to discuss the seismic and topographical challenges the pipeline would be subject to crossing the B.C. wilderness or the problems associated with cleanup of pipeline spills in that vast emptiness.   They don't want to refute what the Coast Guard types out here are saying, that a supertanker disaster in the Hecate Strait or Dixon Entrance isn't a matter of "if" but a matter of "when and how often."   They don't want to talk about what a bitumen spill would do to the seabed 600-feet down, what it would do to the local ecology or how there's no technology in existence or coming down the pike to do anything about it.   And they sure as hell don't want to talk about the liability cut-outs planned for the Chinese supertanker operators, for Enbridge, for Big Oil and for Alberta and Ottawa that will leave British Columbia on the hook.   Why if this is such a damned good thing for Canada, such a safe venture, have all the key players put in place means to escape liability when it all goes wrong?  If the tanker operators are afraid of it, and Enbridge is afraid of it, and the oil producers are afraid of it and Alberta and Ottawa are afraid of it, shouldn't British Columbians be allowed to ask why?

They claim to agree on environmental protection and then ignore the litany of environmental perils that underlie the bitumen pipelines.   They must be working straight from the old R.J. Reynolds playbook.

They want to pretend that British Columbia's opposition is all about shaking down Alberta.   The rest of the provinces may be content to line up behind Alberta and Ottawa and demand that B.C. lie down and play dead.   We need to talk - about all the issues listed above and more - but unless we can have a discussion on these and some straight answers, there's really nothing to talk about.
Posted by The Mound of Sound at 10:13 AM

Having a conversation with a warmist is like trying to talk to a bitumen booster. It's impossible to have a wide ranging conversation covering all the bases.
Other than that I liked the post. I've seen too much covered up about the Gulf of Mexico Deepwater Horizon blowout making the Exxon Valdez history far more relevant.
Check out the idiocy of using Core-exit for instance. Dispersing pollution increases its surface area, volume and toxicity.
But it was done in both cases - and more recently near Australia. Meanwhile Dr. Riki Ott will make you turn bilious green with her revelations on Huffington Post.