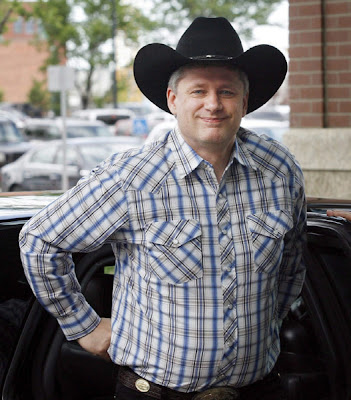 The world's woes, claims Harper, would be solved if only other nations could be just like Harperland, er Canada.   Because Canada has been blessed with the vision of Steve Harper - reforming immigration (allowing Big Oil to use guest workers), curbing entitlements and gutting environmental reviews.

"New economic powers continue to rise and older ones, ones very much like our own country, continue to struggle. They’re weighed down by debts they can’t control, by entitlements you can no longer afford and growth that shows no signs of returning,” he said.

“Under our conservative government, Canada will not slip back the way so many other developed countries are slipping back,” he said. “To succeed what the world must become in the future is what Canada is today.”

When my wife looks at him she gets physically sick. How is that so? All woman/mothers know he is a retard, and retard simply means slow stupid and backwoods it is not a slur on handy-caped people...

The big truckers use "retarder" brakes to slow down...

We need one on Stephen...

What we're seeing is an ideologically-bound technocrat pretending to be a national leader. That much is obvious in the narrow range of issues that consume Harper's attention. What he doesn't like is essentially ignored, shelved, buried.