What's Up? Flash Floods, That's What.

From Britain to Africa, America to China and Russia, India to Canada, no corner of the world seems immune to flash flooding.   Is global warming the culprit?   In most cases, probably.

We done gone and broke the hydrological cycle. 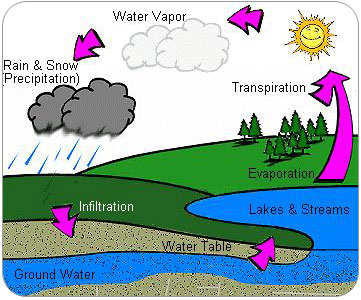 How we broke it is as easy to understand as it is to prove with basic meteorolgical instruments.   We have warmed the atmosphere.   Not as much as we will warm it over the balance of this century but already enough to alter the hydrological cycle.   A warmer atmosphere coupled with global warming increases the evaporation of surface water into water vapour.   You wind up with more water vapour heading into the atmosphere which, as luck would have it, is likewise warmer so it can hold more water vapour.   Think of it as shifting the Earth's water from the ground to the sky.

Because the warmer atmosphere can hold more water vapour it doesn't have to return that to the surface as rain or snow as it once did the way we came to expect it over the past centuries.   Now it's more likely to skip some places altogether and hit others with deluges that cause flash floods.

So, what are we going to do about it.   In the worst-hit spots we can implement adaptation measures, floodways and such, but the real cause is warming and we're not on track to do anything about that.  How bad could it get?   Well the Brits have been warned that they could have a four fold increase in flooding by 2035.

As severe floods continue to batter parts of Britain after the wettest June since records began, around one in seven homes and businesses face some kind of flood risk, the climate advisers said.

Around 160,000 properties would be at risk by 2035 if better planning and more investment was made in flood defenses, compared with 610,000 at risk if no action was taken, they said.

Like every other climate change impact, we in Canada - especially our political classes - are paying no heed, none whatsoever.   We're just whistling past the graveyard.
Posted by The Mound of Sound at 11:18 AM

Combine this with clear cutting of the forests. When trees are removed there is nothing to hold back any water at all.