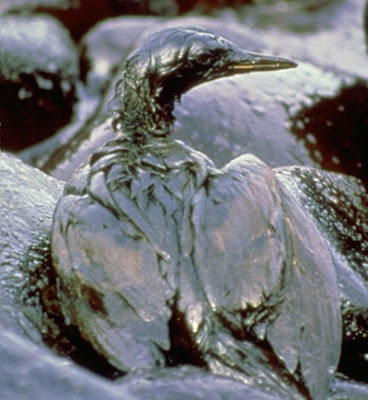 Why has Stevie Boy Harper gutted fisheries and marine protection services and staff, leaving the British Columbia coast seriously unprotected, just as he's pushing through the greatest environmental threat our coast has ever seen?

Firing monitoring and research staff, entire departments, at Fisheries and Oceans.   Relocating the west coast oil spill emergency centre from, well, the west coast to Quebec?   Closing major Coast Guard stations?   Why all of this?   Why now?   There's only one answer.  To Harper, the people who protect our coastal environment and our fisheries are potential snitches who'll blow the whistle on him and his Alberta pals.

They have a lot of questions about Enbridge's proposal to ship Alberta heavy oil from Kitimat, particularly with Ottawa reducing safety measures on the coast.

Much ado has been made about the federal government's budget-cutting plan to shut the coast guard operation in Vancouver. Less attention has been paid to the closing of two other marine communications and traffic services centres in Comox and Ucluelet, which will leave just the two remaining stations in Sidney and Prince Rupert to handle the entire West Coast. Not only does that mean a loss of local knowledge, but half of the coast could go unmonitored when communications systems fail, Hughes says.

...It can take several minutes to extract even the most basic information from bridge watch-keepers whose grasp of English is tenuous - and when you're in congested waters, you don't have minutes to react.

Hughes' members tell him language issues mean some foreign-flagged ships pose a higher risk of grounding or being involved in collisions, which makes those members wonder whose tankers would carry the heavy, gooey Alberta bitumen from Kitimat.

Note that B.C.'s northern waters are sufficiently treacherous that for decades tankers carrying Alaska crude have complied with a voluntary ban on sailing them. Instead, oil-carriers stay well out to sea before turning into Juan de Fuca Strait. How is it that an area deemed too dangerous for U.S. tankers is safe enough for others?

"The fact they intend to transit Hecate Strait or Dixon Entrance in winter is a disaster waiting to happen," Hughes says.

Knox asks a question that's had a lot of us wondering.   Just what is our premier, Christie Clark, playing at?   Is she actually Harper's and Enbridge's Judas Goat?

Funny how in a single day the debate moved from whether B.C. should back the pipeline to how much we should get for doing so.

Before fighting over how to divide the pie, shouldn't we decide whether to bake it at all?

And shouldn't we be asking Ottawa why it is cutting coastal safety at the same time it raises the risk?

Names such as Hecate Strait, Dixon Entrance or Second Narrows don't mean much east of the British Columbia/Alberta border but they mean a great deal to those who have navigated them and know how treacherous they can be.   Yet they're not nearly as treacherous as Steve Harper, Enbridge, the Alberta government, our Petro-Parliament and a nation largely indifferent to the perils of the west coast.
Posted by The Mound of Sound at 9:48 AM