Is Vic Toews Responsible for Hikes in Canada's Homicide and Child Abuse Crimes?

To hear the Minister of Family Values and Random Diddling, Vic Toews tell it, he's responsible for the overall drop in Canada's crime rate even though it has been declining steadily since 1992.  Well, if Toews is to claim credit for the by now predictable drop in overall crime, surely that means he should be held responsible for the spike in homicides and sex crimes against children on his watch.

As the graph reveals, Canadian crime rates have been dropping pretty steadily for the past 20-years. 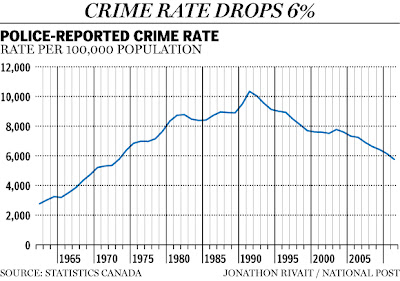 Toews may want to credit the Conservatives' omnibus crime bill for the decrease but, then again, that's what they would do even though the bill was only passed in December and therefore had no impact whatsoever on these statistics.
Posted by The Mound of Sound at 2:53 PM

Vic is a pathological head case.

Vickie is just a crazy old man who needs to retire somewhere remote where he can't do any more damage.

Canada was doing just find without him & we will do so much better once he is gone. The man is out of touch with reality. I sometimes wonder if he goes off medication.

Ya Vickie is gonna get an appointment as a judge in Manitoba...

Kinda like appointing a pedophile to look after kindergarten...

And Stephen Harper is drooling...

Vic will send everyone to jail and Stephen will say see Vickie is filling jails faster than I can build them therefore we need more.

Silly you, did you not read the retroactive temporal clause in the crime bill? It clearly states the law once passed would actually have effects reaching into the past. Therefore our consistently dropping crime rates seen today are actually caused by the crime bill's relativistic effects. You can thank Time Lord Toews for this.