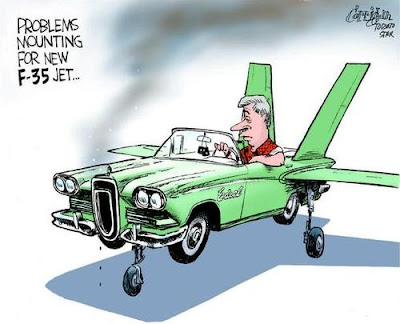 The F-35 is about one thing, stealth.   This light attack bomber sacrifices everything for that one quality, stealth.   It sacrifices payload and range, two pretty important abilities for a penetration bomber intended to attack important targets in heavily defended enemy airspace.   It also sacrifices every quality that makes a great fighter - speed, climb rate and turn rate.   According to a RAND Corporation assessment, the F-35 is an aerial turkey that can't out run, out turn or out climb even older vintage Russian fighters.   But, the argument goes, that all doesn't really matter so long as the bad guys can't detect the F-35, so long as it is cloaked in stealth invisibility.   Does that sound like putting all your eggs in one basket?   It should.

The Russians know the score.    So do the Americans.    That much was apparent from this passage in a recent article in Aviation Week about Israeli and American defense planners .

"...defense planners in both countries have accepted the fact that stealth is a perishable product with today's designs good for 5-10 years."

Now, do the math.   It's going to be five years, more likely seven, possibly even ten before the F-35 arrives at RCAF hangars.   So it's more than likely that the Canadian F-35s will be effectively D.O.A. - dead on arrival.   Why then are the Conservatives and the RCAF so keen to get our aircrews saddled with the Joint Strike Fighter?

Could it be that the F-35's main mission isn't combat related at all?   Could it be that the F-35 has a political mission, for the government and the armed forces?   Is it Canada's gesture to display our fealty to the U.S., our military's admission ticket to America's Foreign Legion and the upcoming foreign wars?  It's got to be something to get us to squander tens of billions of dollars on a high-tech white elephant with a perishable advantage without which it's just a crummy performer.

It's obvious that the F-35 is not a capable aircraft for Canadian requirements. The Super Hornet, or Grippen, or whatever, would be more capable and more economically reasonable replacements for the current Hornets.

It is partially about politics, but more about money. Nigel Wright, the PM's chief of staff and board member of Beechcraft - a partner with Lockheed-Martin on the F-35 project - was, I think, brought in to stick handle the F-35 through the Canadian purchasing process.

There are huge amounts of money involved in the F-35 deal, anywhere from 30 to 50+ billion dollars. In essence, I think the whole point of the deal is simply about transferring more of the public treasure to wealthy corporate interests.

thanks for the link, Anon