An autopsy report concludes that Michael Zihaf-Bibeau, the Hill gunman, received 31 bullet wounds, all sustained within the Centre Block.  The all seeing, all knowing coroner also found that the gunman died from the 31st round, a shot to the back of his head.  In other words, after being riddled with 30 wounds, Zihaf-Bibeau remained a threat and warranted being dispatched by a coupe de grace shot. 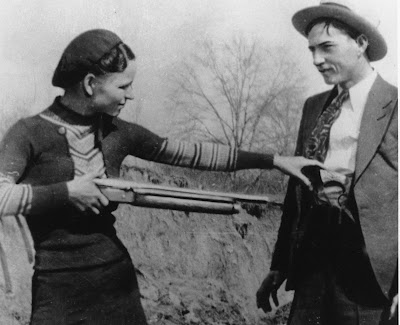 How do you make sense of 31-bullet wounds?  Well you might be familiar with the end of American bandits, Bonnie and Clyde.  They were ambushed in their car.  There were six officers waiting on the pair, each armed with a pistol, a shotgun and an automatic Thompson "tommy gun" submachine gun.  As Clyde slowed the car, all six opened up with their submachine guns, pouring 150-rounds into the front seat of Barrow's car.

"Each of us six officers had a shotgun and an automatic rifle and pistols. We opened fire with the automatic rifles. They were emptied before the car got even with us. Then we used shotguns ... There was smoke coming from the car, and it looked like it was on fire. After shooting the shotguns, we emptied the pistols at the car, which had passed us and ran into a ditch about 50 yards on down the road. It almost turned over. We kept shooting at the car even after it stopped. We weren't taking any chances." 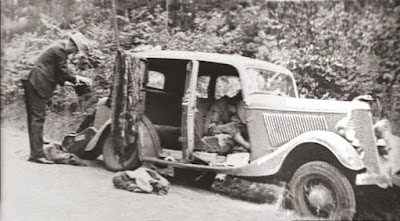 Makes you wonder how many rounds had to be fired to get 31-slugs into the body of Zihaf-Bibeau?  It wasn't a staged shooting.  There was a great deal of panic, lots of running - and ducking.  The guys on the Hill were after an active shooter quite ready, apparently, to take them out.

I'm guessing that 31-rounds would have brought down Hercules with enough left over to take down Hector and Lysander to boot.  And I'm guessing that this kid was "hors de combat" long before that 31st and "final" shot to the back of his head.

Word is that the cops won't be releasing video that shows the shootout in the Centre Block.  That's probably for the best. It might raise too many questions.
Posted by The Mound of Sound at 4:36 PM

It was that last shot that had me wondering. Yes, the first 30 shots were fired in chaos; stupid but understandable. The last shot, to the back of the head, made Kevin Vickers an hero. Curiously, he may not have actually fired that last shot but he got the credit and is a national hero.

Somehow, I just can't think hero when guns are involved.

Have you seen the video from as he was arriving on the street. There is a far view and street view of him pulling up in the car before his spree began. Watch the street view shot a half a dozen times and see if you can pick up on the strange behaviour of random "businessmen" loitering on the road.

Perhaps that was why Steve was quavering in the closet? He must have thought either ISIS or Putin must be gunning for him?

Turns out the racket was mostly from the "good" guys trying to take out one bad guy with at most 4 shots left in his old rifle (bad guy had shot the Corporal 3, not 2, times and the second soldier at least once; his rifle, if fully loaded would have had only 8 shots).

Seems that Bibeau must have got at most 2 shots out within Parliament. Are we supposed to be impressed here? Real miracle no one else was killed from friendly fire. Lol

Kevin Vickers is no hero. I don't know why that narrative is starting to take hold.

This will be remembered decades from now as Canada's Reichstag moment. Apparently, security forces were unable to control the situation because there were MANY police/security people going around wearing black scarves and other paraphernalia. Videos from the event have been held back or clipped beyond recognition.

The result: Bill C-51, Canada's most heinous hamstring chopping legislation ever when it comes to privacy and individual rights.