Great news for Donald Trump.  A new poll has him in first place in the race for the Republican presidential nomination.  Around the same time the poll was released, Trump tweeted this photo to his followers.

What's wrong with that picture.  The American flag is superimposed over Trump's swelled head and then some American currency, the White House and, finally, what appear to be brave American soldiers.

Wait a minute.  Those aren't American soldiers!  They're Hitler's boys, the Waffen SS. 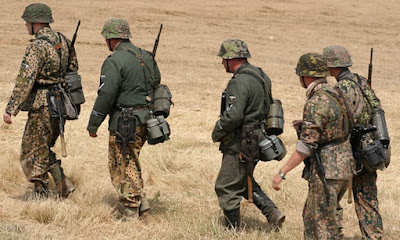 Sure they are, right down to the leopard spot camo worn by the Fuhrer's best and bravest.  Whoever took that stock photo for Trump's tweet just couldn't tell a murderous Nazi storm trooper from what President Trump's soldiers might look like.  You idiot.  You're fired!
Posted by The Mound of Sound at 5:31 PM

WOW! Just WOW! Just when I think it's reached the all time low...well you know the rest.

I'll bet Hillary is having the best laugh.

Republican nitwittery of this sort doesn't surprise me at all, but I think from the quality and colour of this photograph of the German troops that they might very well be World War 2 re-enactors. I know that there are several groups in the US and Britain that put on mock WW2 battles. At the annual autumn airshow usually held around Easter at Wanaka in New Zealand they put on a big show that also includes Allied and German military vehicles, some mock tanks, and other such. They've even got a functional Flak 88 and a mocked-up V-2 rocket...

every picture tells a story. the truth is Trump just wants to get his kicks until the whole shithouse burns down.

The real folly:
Trump is explicitly stating that his AmeriKKKa is NOT great now.