El Nino Is Coming for Christmas.

They're calling it a "flash mob" of typhoons being spawned out of the unusually warm waters of the central Pacific.  It is a succession of cyclonic storms, hurricanes, that are heading west to batter the Asia Pacific region.  Those who understand these things say those typhoons are also driving the super El Nino building in the eastern Pacific off the west coast of South America. 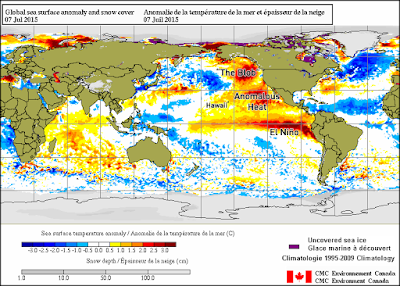 No one is quite sure yet how this will manifest across drought-stricken parts of North America, especially the west coast from Mexico to Alaska.  El Nino conditions are expected to set in at some point in December.
Posted by The Mound of Sound at 9:58 AM