There's a Dam Bursting in Puerto Rico. That Might Be the Least of Their Water Problems. 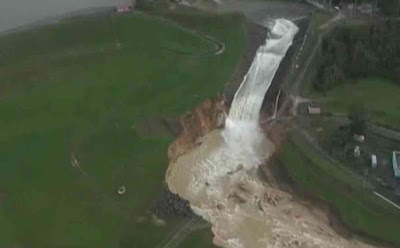 70,000 Puerto Ricans have been ordered to evacuate an area downstream of the Guajataca dam. A crack discovered yesterday has now breached the dam and the reservoir has begun to empty.

The Guajataca dam is one of a handful in the territory that together represent the island's freshwater supply. The island has many rivers but no natural lakes and so the dams were the solution. Long before Puerto Rico was raked by Hurricane Maria that water supply was in a terrible state.

There are reports going back years on the degraded state of the territory's fresh water supply. NBC News described it as a crisis in May of this year.

"Puerto Rico just clearly has the biggest challenges of any state or territory in the United States," Olson said.

The drinking water fails lead safety regulations, while 70 percent of the island is served by water that violates federal health standards. The government-run water utility also routinely fails to conduct the required safety tests, while failing the safety tests they do conduct, according to a new NRDC report.

Following the NRDC's May water safety report, data provided to NBC News showed San Juan, Puerto Rico to be the worst big-city water system in the nation. There, the Puerto Rico Aqueduct and Sewer Authority (PRASA) had more violations than any other big city, with 64 safety violations, including 24 different health violations, in 2015.

God is not smiling on Puerto Rico.  A 12-year recession leading to bankruptcy, the migration of its citizens to the mainland in search of a future, the truly catastrophic devastation of Hurricane Maria, a failed electrical system that may leave the island without power for months, the dam collapse and the loss of a major reservoir and an already contaminated fresh water supply, a federal government that will probably supply only a fraction of the amount needed to get Puerto Rico back on its feet, it's hard to guess where recovery efforts begin and how local authorities can cover the costs. It's like a prize fighter unable to defend himself at the end of a bout where his opponent delivers blow after blow after blow, unopposed, until the ref finally intervenes. Puerto Rico's resilience may now be akin to Haiti's. Unlike the Haitians, however, Puerto Ricans can flee their island.
Posted by The Mound of Sound at 12:02 PM

Maybe the displaced Puerto Ricans could all move to Mar-a-Lago.