When the Carbon Sink Becomes a Carbon Bomb 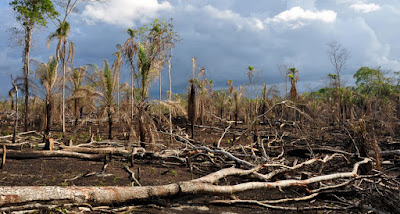 One of the things we've counted on in wrestling with cutting greenhouse gas emissions are nature's carbon sinks.  A carbon sink is a natural process that strips carbon out of the atmosphere. The biggest of them all are the world's oceans and seas. Another big one would be the world's forests, especially our rain forests. Or so we thought.

The oceans are becoming saturated and they're also warming, reducing their ability and capacity to remove and store our carbon waste. Fortunately we've always got those forests soaking up carbon for photosynthesis and providing precious oxygen. Or so we thought.

A report just published in the journal, Science, says around the world our forest stocks have become so degraded that they're now a net producer of CO2, generating more of the persistent greenhouse gas than all the traffic in the United States.

“This shows that we can’t just sit back. The forest is not doing what we thought it was doing,” said Alessandro Baccini, who is one of the leader authors of the research team from Woods Hole Research Center and Boston University. “As always, trees are removing carbon from the atmosphere, but the volume of the forest is no longer enough to compensate for the losses. The region is not a sink any more.”
Posted by The Mound of Sound at 1:00 PM

That's another feedback loop accelerating global warming. Sorry, Justin, we are running out of time.


Most of this problem, Toby, is man made, deforestation. Here at home we have the pine beetle and other insect infestations. Those are natural feedback loops. And, yes, we do appear to be running out of time.

Hey, let's not worry too much. The more carbon we burn, and the more minerals and nutrients that run into the waters, there'll be other forms that will step into the void created by deforestation.
Such as during the Devonian Extinction event. Sure, all those nutrients might seem like they're going to waste, and the Earth might seem like it's getting excessively warmer, but we are creating prime conditions for massive algae blooms.
I wonder if we could survive such?