Wait Just One Second. We Let Conrad Black In But Turn Chelsea Manning Away? 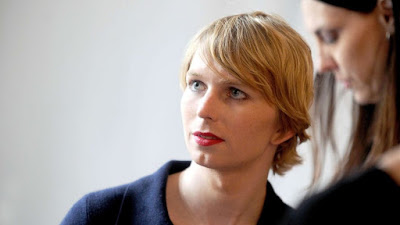 C'mon, Justin. Just for a while can you pull that giant rag out of your ass? Tell those boys and girls in those little booths to let Chelsea Manning visit Canada.

The former U.S. soldier who leaked thousands of classified military documents says she's been barred from entering Canada as a result of her criminal record.

Manning is a 29-year-old transgender woman who was known as Bradley Manning when she was convicted in 2013 of leaking the trove of classified material.


The letter says that because she was convicted of offences that are equivalent to treason in Canada, she's inadmissable to this country.

On Twitter, Manning says she'll be appealing the decision.

And what about this Conrad Black business, Canada's immigration dark farce? How about we let Chelsea come visit and send Conrad Black to the country where he's not only a citizen but also a member of the freakin' House of Lords? Why does he get to stay here? Because he'll be widely rebuked, even shunned over there? Who cares?

Completely off-topic, a friend relayed a good one heard on CBC this morning. The guest said about calling Catherine McKenna "Climate Barbie" that Justin deserves to be called "Climate Ken" because, when it comes to climate change, he has no balls.
Posted by The Mound of Sound at 12:55 PM

Hey the CBSA did something Canadian. We do not let traitors to the United States or any other member of the five eyes roam our nation. Oh Canada, eh? our parents and grandparents did not fight, get wounded or die for nothing.


What did they fight, get wounded and die for? How do you know and who chose you to speak for them? I come from a family flush with those who fought, were wounded, even one who died. My dad was horribly wounded. What makes you imagine you're fit to speak for him? To me you come across as just another vainglorious, rightwing wanker.

This is not complicated stuff..

but then again, Canada is a country of Election Fraud
and a related incumbent government that dealt with the criminal act
by screetching 'baseless smears' ..
and that government on attaining a majority
began driving new laws via omnibus 'budget' bills
and eliminating existing laws in the same omnibus manner..

Pray tell aussi.. has Trump's Homeland Security
been in touch with Trudeau's Immigration Department
on the Manning Matter ?

Only time will tell
and Freedom of Information requests - answered ..
without being completely blacked out..
(National Security y'know)

Don't hold your breath on that !

Nelson Mandela was also convicted of offences that are equivalent to treason in Canada. Yet he addressed the Canadian parliament and was made an honorary citizen.

In principle I don't see why an offence against one's own country should make a person inadmissible to Canada. Such a person poses no additional security risk here - unlike, say, a convicted fraudster.

A fraudster, I might add, with an obstruction of justice conviction resting in part on his violation of a Canadian court order.