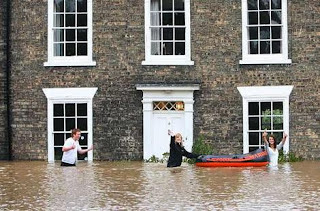 I'm reluctant to let this out but - oh well, the climate of our planet is changing and, in terms of our relativey frail life forms, the changes are powerful.
If it isn't the heat that gets you, it may be the rain. Just about every place on the planet is getting hotter. In colder areas that can be a mixed blessing. In normally hot regions, it's an outright curse.
Even once-mild Europe isn't spared. Heat waves have claimed thousands of lives in places like Paris and, further south, the Meditteranean shores are becoming seasonally unbearable. The eastern Med, in particular, is scorched and parched.
The same goes for the southeastern and southwestern regions of the US where what's expected to be a long-term drought has set in. The populations that have migrated to Florida, Arizona, New Mexico and the like are now having second thoughts - and not because they want to.
The rainfall these places need hasn't disappeared, it's merely moved on and concentrated in places as diverse as China, Texas and Britain. The populations of those areas aren't short of rain, they're floating in it. The curious thing is that all that rain often means no drinking water. Go figure. (if you don't understand, it's because floodwaters inundate municipal water and sewer systems, leaving drinking water contaminated and unfit).
Those who prefer it cold are going to be drawn closer to earth's poles. Some who need it cold - polar bears and the Inuit, for example, are going to have to find ways to adapt. The Inuit have been advised to get rid of their snowmobiles and go back to dog teams because dogs can recognize thin ice and, if your sled does go in, can sometimes pull you right back out. Now there's a comforting thought.
The Good Old Days are now the Gone Old Days. That's more than a bitter lament. It means that, in addition to rallying to the fight against global warming, we need to direct resources and efforts to finding the very best ways and means of adapting to what's already arrived and what will be coming in the near future.
In Canada we need to grasp how blessed we are compared to most of the planet, including our immediate neighbour. We need to appreciate these natural advantages and decide what we need to do to preserve, even defend them. Let's not delude ourselves: this is going to take time, effort, resources and an awful lot of goodwill and co-operation if we're to do this right. We can't obsess about getting back the Good Old Days. They are now, by any measure, the Gone Old Days.
Posted by The Mound of Sound at 8:35 AM

That's the thing, we are lucky here, and we have the balls to sit on our butts and believe we have to do nothing else to preserve it.