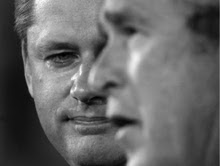 Oh he was so pure. He was just the man to cleanse Canada's parliament of the loose ways of the Liberals. Stevie was going to wash the place down with his very own Holy Water.
Remember when Harpo promised that his government - that would be Canada's New Government by the way - would end the practice of partisan appointments to federal boards and commissions? Guess what?
It's Harpo's turn at the trough now and he's going just as fast as he can to show us that he's a complete fraud, an outright liar. Huh?
Just as Adbusters outed Harpo on the environment, Democracy Watch has now outed him on his accountability promises. From the Toronto Star:
Since the beginning of the year, the Tories have made about 800 appointments, many of them with close ties to the party, and there is still no sign of an independent public appointments commission, said Duff Conacher, co-ordinator of Democracy Watch, a group advocating government accountability and corporate responsibility.
"To lie to the voters, to mislead the voters during the last election on this issue of government accountability shows a very high level of hypocrisy and dishonesty," Conacher said.
It has been seven months since the Tories' much-vaunted Accountability Act was passed, with the appointments commission its centrepiece.
But critics suggest the commission will never happen because the Conservatives' chances of being re-elected seem to be fading.
The Accountability Act, drafted by the Tories in response to the Liberal sponsorship scandal, passed the Commons and Senate and received royal assent last December, but a separate cabinet order is required for many provisions to come into force. The wording is such that there is nothing forcing cabinet to establish the appointments commission.
Let's face it folks, Stephen Harper is an outright liar. What was it his mentor, the honourable Mulroney used to say? "No whore like an old whore," yeah that's it. Now, what about that global warming thing?
Posted by The Mound of Sound at 9:47 AM