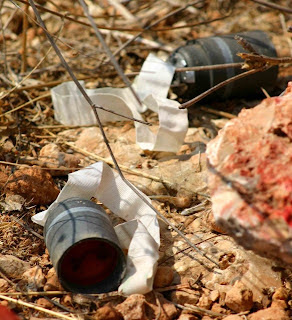 The Winograd commission enquiring into the Israeli government and Defense Forces' actions in last summer's Second Lebanon War, as it's called, has also agreed to examine claims that the IDF committed war crimes during the fighting.
In response to claims by the left-wing Meretz party that war crimes had been committed by Israeli forces, Winograd said the panel's final report will examine the war's events from the perspective of international law.
The examination hinges on the IDF use of cluster-bomb munitions fired by rockets into residential areas. The UN reports that leftover, unexploded bomblets have killed 30-Lebanese civilians and wounded 180 since the hostilities ended last summer. The UN estimates Israel fired about 3-million bomblets into Lebanon.
Most of Israel's cluster weapons were provided by the United States. Following the war the US State Department investigated and concluded that Israel violated a committment to the US not to fire cluster bomb weapons into population centres.
Last year the Israeli newspaper Haaretz reported that the large number of unexploded cluster bomblets littering Lebanon resulted from the IDF's decision to buy cheaper and unsafe American cluster weapons:
The cluster bombs constitute the number one humanitarian problem facing Lebanon after the war because many of the bomblets remain unexploded and as duds, they have turned into make-shift mines, converting towns, villages and fields into undeclared minefields. Since the cease-fire went into effect on August 14, at least 14 civilians, including many children, have been killed by the unexploded bomblets.
The United Nations demining unit estimates the ratio of duds in the cluster bomblets fired by Israel could be as high as 30-40 percent. This translates into hundreds of thousands of unexploded bomblets throughout southern Lebanon, endangering the lives of residents and preventing farmers from working their land.
Posted by The Mound of Sound at 11:01 AM

Bomblet, eh? What a cute little name.
I wonder is Steve is ever going to get around to having that investigation into the calculated murder of Major Paeta Derek Hess-von Kruedener, by Israeli artillery. My guess is Stevie doesn't want to ruffle feathered nests.

There's nothing cute about bomblets. Kids are drawn to pick up of kick things that are relatively small and look mechanical. Or farmers step on them or, if they're lucky, it's their livestock that detonate the unexploded ordinance. Using cluster bombs in populated areas is barbaric.

There's a real tale to be told about the massive quantities that Israel fired into Lebanon in the hours immediately before the ceasefire. That wasn't to accomplish any military objective. It was purely punitive and intended to attack the civilian population. That's barbaric and it's criminal. However it's also okay as far as Stephen Harper, George w. Bush and those of their ilk are concerned.

Do you think hezbollah would ever launch an inquiry or a probe into whether or not they had committed war crimes? See there's the differemce.

No, I don't place Hezbollah and Israel on the same plane. Israel is our ally, Hezbollah isn't. We back Israel, not Hezbollah. I actually hold Israel to a higher standard and I believe that's proper. As for the war crimes enquiry, I commend the commissioner for agreeing to tackle the issue but don't, for a minute, believe he was acting with the approval of the Israeli government.

Good answere re: Israel being our ally and that we should expect higher standards.