The Right Thing to Do 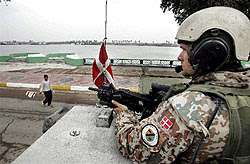 Denmark is preparing to withdraw its troops from Iraq where they've been serving under British command in Basra.
In preparation for their departure, the Danes have secretly extracted 200-Iraqis who had been working for them, mainly as translators. All will be offered asylum in Denmark.
"It's the right thing to do," said Captain Joergen Christian Nyholm, who served in Iraq. "My personal opinion is that they are at a pretty high risk."
Posted by The Mound of Sound at 8:12 AM

The question I have, Kingston, is whether other NATO members and, especially the US, will follow suit? As you've been twice to Afghanistan, what do you think we should do with our indigenous civilian staff?

My heart says take them out if we pull out, my brain says were not at this point so lets wait until we see the situation on the ground and offer them the option. Actually, Just decided, Offer them the option when we leave either way, they are doing us a great service and risking their lives.

Agreed, it is the right thing to do in both Iraq and Afghanistan.
Part of a much needed "exit strategy".

Sad commentary on the state of these missions - essentially we are admitting that they have utterly failed.

Ron, let's face it. We failed because "we" never set out to win. The Bush regime fired Shinseki when their top general said the US needed several hundred thousand troops to tackle Iraq. They've waged a war costlier, in real dollars, than Vietnam where the US had almost 600,000 soldiers at its peak, while cutting taxes for the rich. You can't be serious about winning a war of that magnitude without requiring some real sacrifice at home. This whole business - Afghanistan and then Iraq has been a Frat Boy's lark, one that he has to continue because he's allowed himself and his nation no other choice save to admit defeat. In effect, we're fighting the Frat Boy's war in Afghanistan because he got his nation stuck in a war he can't win and can't finish in Iraq.

Yes, we need to take out our own indigenous civilian staff from Afghanistan. The honour of our military and our country requires nothing less.

Michael Neuman in counterpunch provides a link to a RAND study showing 500k troops needed as per bosnia/kosovo ... but thats Europe.
Huge armies (your #s for US/Vietnam & USSR/Afghanistan) have not worked either.