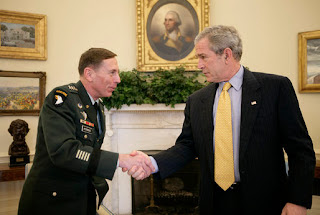 Frank Rich, writing in today's New York Times, details the surprising rise to political power of General David Petraeus, America's last hope in Iraq. Rich claims Bush has all but ceded the Iraq problem to his top general:
And so another constitutional principle can be added to the long list of those junked by this administration: the quaint notion that our uniformed officers are supposed to report to civilian leadership. In a de facto military coup, the commander in chief is now reporting to the commander in Iraq. We must "wait to see what David has to say" Mr. Bush says.
Actually, we don’t have to wait. We already know what David will say. He gave it away to the Times of London last month when he said that September “is a deadline for a report, not a deadline for a change in policy.” In other words: Damn the report (and that irrelevant Congress that will read it) — full speed ahead. There will be no change in policy.
Rich goes on to dismantle the Petraeus image as just that - image:
It has been three Julys since he posed for the cover of Newsweek under the headline “Can This Man Save Iraq?” The magazine noted that the general’s pacification of Mosul was “a textbook case of doing counterinsurgency the right way.” Four months later, the police chief installed by General Petraeus defected to the insurgents, along with most of the Sunni members of the police force. Mosul, population 1.7 million, is now an insurgent stronghold, according to the Pentagon's own report.
By the time reality ambushed his textbook victory, the general had moved on to the mission of making Iraqi troops stand up so American troops could stand down. “Training is on track and increasing in capacity,” he wrote in the Washington Post in late September 2004, during the endgame of the American presidential election. He extolled the increased prowess of the Iraqi fighting forces and the rebuilding of their infrastructure.
The rest is tragic history. Were the Iraqi forces on the trajectory that General Petraeus asserted in his election-year pep talk, no “surge” would have been needed more than two years later. We would not be learning at this late date, as we did only when General Peter Pace was pressed in a Pentagon briefing this month, that the number of Iraqi battalions operating independently is in fact falling — now standing at a mere six, down from 10 in March.
In Rich's analysis, Petraeus' main role has now become anchoring an increasingly delusional president - a political, not a military role.
Posted by The Mound of Sound at 7:40 AM