Dead, But Not Before Its Time 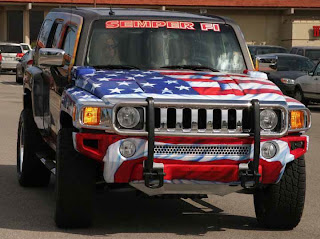 Is the Hummer about to go the way of the Dodo bird?

With U.S. gas prices forecast to hit $4/gallon, General Motors is now trying to figure out whether the Hummer division should be killed off, sold off or transformed into something a little less - well, less stupid.

Oh there'll still be holdouts, the clowns who'll think they'll make their mark by continuing to drive the big box, but their numbers will dwindle about as fast as Edsel buyers in the 60's. And what sort of resale price do you think they'll fetch when these jokers finally decide to unload them?

The once Big Three are providing an invaluable object lesson in what happens when industry, business or even individuals don't approach climate change proactively. Thousands of people lose their jobs, plants close and asset values plummet - at least that's the climate change template for automotive manufacturers.

General Motors, Ford and Chrysler ought to have understood what happens when a company falls behind changing market conditions. It's how they capitulated to competition from foreign passenger car makers. They thought they could remain viable and profitable by concentrating instead on the pickup truck and SUV markets and, like Easter Islanders, they held fast to their self-defeating policies until it was too late.

It's sad really. It didn't have to be this way. It should never have been allowed to get to this point. It's like running into a brick wall - a wall that you've been watching draw ever nearer for miles yet wouldn't take your foot off the gas.

Lumbering behemoths often fall prey to the small, quick and agile. That's the reality that confronts the Big Three today. Suddenly they have to learn to dance.

http://www.theglobeandmail.com/servlet/story/LAC.20080607.RCOVER07/TPStory/TPBusiness/America/
Posted by The Mound of Sound at 6:37 AM

Gee Mound . . . last time I checked . . . GM and Ford had a number of small fuel efficient cars.
But trucks are a necessity for some people . . . if you work in construction, have an RV to pull or haul . . . you certainly can't do it with a Prius.
And speaking of Prius . . . did you know the battery in this vehicle has a carbon footprint equivalent to driving a Hummer for a year!! That is before it ever leaves the dealer's lot.
I believe battery/electric hybreds will have a very short life span . . . 5 to 7 years . . . cause the cost of replacement batteries and the complexity of the electrical systems will make them very costly to maintain and repair once they are off warranty.
Another area where small cars fall flat is safety . . .
The National Highway Traffic Safety Administration has estimated that since CAFE was implemented, more than 46,000 traffic deaths would have been avoided if people had been driving heavier cars. Many tens of thousands more, of course, have been needlessly injured.
The NHTSA concluded in an October 2003 report that CAFE standards are even deadlier than the agency previously thought.
Every 100-pound reduction in the weight of small cars (those weighing 2,950 pounds or less), for example, increased annual traffic fatalities by as much as 715, according to NHTSA. For larger cars and light trucks, the agency estimated that each 100-pound reduction in weight would increase annual traffic fatalities by as much as 303 and 296, respectively.
“When two vehicles collide, the laws of physics favor the occupants of the heavier vehicle (momentum conservation). Furthermore, heavier vehicles were in most cases longer, wider and less fragile than light vehicles. In part because of this, they usually had greater crashworthiness, structural integrity and directional stability. They were less roll-over prone and easier for the average driver to control in a panic situation,” explained NHTSA.
And just in case you’re thinking that air bags will save you or a loved one in a lighter, more fuel efficient car, you may need to reconsider depending on your height.
A study presented this week at the 2007 Society for Academic Emergency Medicine Annual meeting reported that air bags actually are harmful to short and tall people.
Dr. Craig Newgard, an assistant professor of emergency medicine at the Oregon Health and Science University, analyzed crash data for over 65,000 front-seat occupants and found that air bags, while effective for people of medium stature (5-foot-3 to 5-foot-11) were actually harmful to people shorter than 4-foot-11 and taller than 6-foot-3.

So why risk your life to save a few litres of fuel? Today a CTS Cadillac gets mid 30's on the highway, even the Chevy Avalanch gets 27 mpg. Or you could buy the Asian pickups . . . the Toyota and Nissan get the poorest mileage in full size pickup land.
One positive thing though . . . the expensive fuel will keep lots of people off the road, more room for me . . . bet tourism on Vancouver Island will be in the tank this summer.