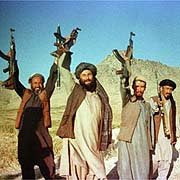 When a Taliban force of 30-guys on motorbikes, supplemented by two suicide bombers and a suicide truck bomb, attack and overwhelm a prison, release 1,100 inmates and then withdraw unmolested leaving behind nine dead prison guards, it speaks volumes for how the Afghan war is going no matter how loudly NATO claims it doesn't.
That is a significant operation to organize. It takes a lot of people and a lot of support and virtually everything they do in the final days before the attack has to be done right under the nose of the government side (that's us). There's a lot of discipline involved, a lot of tactical decisions taken all under a tight blanket of secrecy.
Attacking a prison is one thing but getting away is quite another. That requires real sophistication and a well-trained force of attackers. It also required a convoy of minivans which, it seems, we didn't notice either.
The destruction of the main prison in southern Afghanistan sent NATO spin doctors into overdrive. Spokesman Brig. Gen. Carlos Branco did his best to downplay the whole thing. "OK, they got some more fighters, more shooters. These guys who escaped from the prison are not going to change the operational tempo and they do not provide the Taliban with operational initiative."
No doubt the 400 or so militants, including a number of key leaders, among the freed prisoners won't provide the Taliban with "operational initiative" but the General overlooks that the Taliban already had operational initiative, buckets of it, just in order to stage this raid. They hold the initiative when they can marshall their force at the doorstep of a major prison. They hold the initiative when they can assault and overwhelm a major prison without our intervention. They hold the initiative when they can roll away, unmolested, with their liberated comrades. Remember these are the little guys who fight with what are genuinely primitive weapons, 1950's vintage Soviet rifles and bazookas. They have no artillery, no tanks, no helicopter gunships, no jet strike fighters, no aerial surveillance. Despite all their limitations and shortcomings, the Taliban have shown again that they can freely operate right under NATO's nose and get away with it.
The Taliban are fighting a classic insurgency which is a political war. When the Pashtun villagers of southern Afghanistan see that the guerrillas can overwhelm the biggest prison in the area with impunity, it undermines their confidence in the Karzai government, the Afghan army and NATO and, right now, we've got a lot of egg on our faces.
Posted by The Mound of Sound at 11:43 AM

No matter what the pundits say, the "situation" (war) in Afghanistan is a write-off. 5000 Marines can't help either. It IS a POLITICAL war, as you say. These people haven't lost to much larger and vastly superior armies (Brits, Soviets) - how do we think we (NATO) can defeat them with the small brigades we have there? We don't even have enough force strength to defend the key cities, let alone prisons, borders, roads, villages, or the countryside.

We need to either:
1) Institute a draft, and get all the couch-potato, chicken-hawk cheerleaders in the war, or
2) Pull out, with the least amount of casualties possible...
3) Broker a negotiation that results in peace - except... er... no-one's really interested in peace or negotiations, it seems.

Mound, do you remember that post you made a little while back about the Tet offensive? It was one of several interesting comparisons you made between the war in the middle east and Vietnam (I think that particular post may have more about Irak though).

Anyways, you and Western grit are right, this (like Vietnam) is a political war. It's not enough that we're killing way more enemy fighters than we are losing soldiers.

As we've discussed before, history dictates that when fighting against a guerilla force, the guerilla does not stand a chance of winning if the super power is willing to do pay the price. But history is meant to be re-written. The "hearts and minds" approach did not work in Vietnam, that doesn't mean it won't work in Afghanistan, especially if we learn from American mistakes and try a few revolutionary tactics, such as not dropping napalm on the people whose hearts and minds we are trying to win over.

So far NATO has been in Afghanistan for about 7 years, the Soviets spent about 10 years there. We haven't taken nearly the amount of casualties they did, and we don't have nearly the same troop levels in that country. Maybe NATO is doing something right, or at least better than the Soviets.