Not Like He Didn't Have It Coming - George Carlin, 71 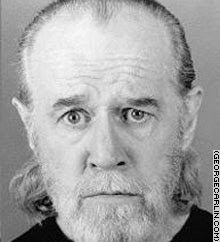 George is gone. If that sounds callous, I really don't believe he'd have the slightest problem with my tagline above. If there were a few things Carlin believed it was that your Karma would catch up with you eventually. He embraced the sinner except more to partake than forgive.
71? I guess it sounds early but maybe we should first ask Keith Richards.
There always was a dark spark inside that guy, try as he might disguise it in the "commerical era" of his career.
Posted by The Mound of Sound at 10:45 PM

A long long long long time ago...the priest at my local church insisted that Jethro Tull and George Carlin were part of a "satanic" culture...that was pretty much the end for me and the Catholic church. RIP George...you were one ground breakin' funny mother*&^%$#!!! That was 6th on the list. billg