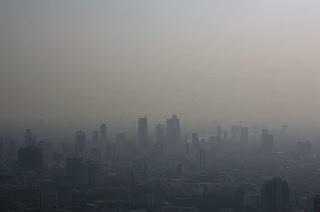 One of the world's top climate scientists, American James Hansen, thinks Big Oil executives ought to be put on trial for crimes against humanity for deliberately and maliciously waging a campaign to spread doubt about the reality of global warming.

For some time I've thought exactly the same thing. Let me explain. Every law student learns of the case where a guy yelled "fire" in a movie theatre. The crowd panicked, there was a rush for the door, people got trampled and some died. Now the jerk hadn't trampled any of the victims, he had no direct part in their deaths. Yet he was tried for and convicted of their killings as surely as if he'd used a gun to shoot them in their seats. Why? Because the law presumes us to intend the logical consequences of our acts. You yourself don't necessarily have to foresee the tragic result as long as it would be foreseeable to the average person. The defendant knew or ought to have known that yelling "fire" would trigger panic that could lead to a lethal stampede. Guilty as charged.

Now let's say I'm the head of Exxon. I'm no dummy, I know the reality of global warming and the suffering and death it's bound to cause. I'm no dummy but I'm willing to bet that plenty of others are and that they can be easily duped. What I have to do is pay some jerks - why not use the same gang RJ Reynolds used to sow doubts about the link between cigarettes and lung cancer? - to do the same thing to the obvious link between fossil fuels and global warming. Why not just get them to deny global warming is even real? That way I can forestall, possibly for years, meaningful action that might hurt my company. That way my company stands to rake in maximum profits until the public finally catch on and demand government intervention.

If the logical consequence of sowing doubt about global warming is to worsen the problem and that can't help but cause additional suffering and death, am I not responsible for the results caused by my actions? Of course, my victims aren't a theatre full of moviegoers but all of humanity and just about every other lifeform on this planet. Therefore, can I really argue that I haven't committed a crime against humanity?

And what of Big Oil's paid collaborators, the pseudo-scientists who earn big bucks by spinning nonsense to the public? They should have been taken off the streets after running the Big Tobacco scam but we left them at large to come back and beset our societies all over again.

Hansen, who will testify before Congress today, spoke with The Guardian:

"When you are in that kind of position, as the CEO of one the primary players who have been putting out misinformation even via organisations that affect what gets into school textbooks, then I think that's a crime."

He is also considering personally targeting members of Congress who have a poor track record on climate change in the coming November elections. He will campaign to have several of them unseated. Hansen's speech to Congress on June 23 1988 is seen as a seminal moment in bringing the threat of global warming to the public's attention. At a time when most scientists were still hesitant to speak out, he said the evidence of the greenhouse gas effect was 99% certain, adding "it is time to stop waffling".

He will tell the House select committee on energy independence and global warming this afternoon that he is now 99% certain that the concentration of CO2 in the atmosphere has already risen beyond the safe level.

http://www.guardian.co.uk/environment/2008/jun/23/fossilfuels.climatechange
Posted by The Mound of Sound at 12:02 PM

So people who don't agree with your position should be charged for voicing their opinion?

Suppression of opposition is fascism.

There's a huge distinction and yet it's apparently not big enough for you to grasp.

Your whole basis of 'fact' in this post is that the evil oil company execs know the earth is coming to an end. Whether you want to accept it or not there are many people who don't buy into the doom and gloom predicted by the computer models. This idea that if you don't believe the Suzuki/Gore version of the story makes you some kind of heretic who should be burned at the stake stinks.

Nice picture of a smoggy skyline, are the pollutants that cause smog and greenhouse gases the same thing?

I've seen more and more of this attitude. Global warming is considered such a dire threat by some that many aspects of our society must be jettisoned in order to save the planet. Free speech, capitalism, and even democracy are on the firing line.

See, for example, the book "Climate Change Challenge and the Failure of Democracy", by Sheaman and Smith. Here's a quote from Sheaman:

"There must be open minds to look critically at liberal democracy. Reform must involve the adoption of structures to act quickly regardless of some perceived liberties."

I suspect that the people suggesting these things never were big fans of liberal democracies or capitalism in the first place, and that global warming is just the excuse they need to clamp down on all this nonsense.

So rabbit.....just because capitalism allows people to make money doesn't mean they have to be greedy, greedy, greedy and continue to take, take, take. "Sustainability" is the operative word....do you know the word at all? You ought to go to China or even South Korea for six months and see what is happening there regarding air pollution alone where people are experiencing health problems directly assocciated with air pollution. However, you are stuck in your cozy Canadian environment looking through the tunnel wearing rose coloured glasses.

"what is happening there regarding air pollution alone where people are experiencing health problems directly assocciated with air pollution."

Yes, air pollution...note the word "pollution" CO2 is not a pollutant.

BTW, once all this global warming nonsense finally blows over just like the ice age scare of the 1970's did, it's Suzuki and Gore that should be held accountable, if that's really the road you want to travel.

Trev and Bunny, you say all the standard lines but omit the essential parts.

Trev, of course there are differences of opinion. They exist even on the IPCC which is one reason their "consensus" reports always wind up understating the problem. Nonetheless there is consensus - agreement of all.

In this context, differences of opinion have to be based on science. You can't just say the sky is green because you want to deny that it's blue. You have to come up with something credible and convincing that shows you have legitimate reason to contend the sky is green.

Take Exxon, for example. It has long since admitted anthropogenic global warming is a reality yet it still paid its shills to deny it.

Now what if an expert engineer looked at your touring bus and told you that the brakes weren't adequate for use on mountain roads. You don't establish that they are but you pay a guy to assure the riding public that the engineer was looney and there's no problem. Are you liable when the bus crashes?

I don't know if you're old enough to remember the Ford Pinto with its exploding gas tank. Ford knew the tank would readily leak gas into the car in a rear-end collision but did the math and decided it was cheaper to settle lawsuits by the families of victims than admit the problem and have to recall all those vehicles to refit new tanks.

Should the Ford executives who devised that policy not been criminally liable for the deaths they knew would ensue from their perfidy?

Bear in mind that Hansen's argument isn't based on Exxon refining gasoline. That's not it at all. His argument is that Exxon ought to be liable for its campaign to fund shills to spread doubt when it had already acknowledged the fact.

Once you take a bit of time and think these things through, your arguments become more than just a bit tenuous. They become tedious.

One other thing. To the scientific genius, Anon 5:27. CO2 isn't a pollutant? Here's a little experiment. Go into your garage, get inside your car and let it run. How long before that non-pollutant leaves you a lovely pink shade of dead?

"This idea that if you don't believe the Suzuki/Gore version of the story makes you some kind of heretic who should be burned at the stake stinks."

It is also worth noting that scientists have been saying the world is warming since the 70s (the ice age theory came and went in the span of a few years as the scientist who first proposed it realized he underestimated the warming effect of GHGs and overestimated the effect the cooling effect of aerosols), and a consensus of climatologist was reached sometime in the late 80s early 90s. In fact it was 20 years ago today that Hansen went to Washington to warn the government that climate change was already having impacts on the globe. What have we done since then? Precious little.

"One other thing. To the scientific genius, Anon 5:27. CO2 isn't a pollutant? Here's a little experiment. Go into your garage, get inside your car and let it run. How long before that non-pollutant leaves you a lovely pink shade of dead?"

What you're talking about is CO or carbon monoxide, not carbon dioxide CO2.

You may want to hold back on your insults until you've at least got your facts straight...but facts aren't important to Liberals are they?

Well that was an ignorant rant. Where in my postings did I say pollution was okay?

You appear to think that capitalism is the enemy here. It isn't. The worse polluted nations on earth were and are communist.

That we should now more closely emulate these dysfunctional societies in an attempt to check pollution is perverse.

You guys are right, I was wrong. It is carbon monoxide. I stand humbled.

But Bunny, don't confuse communism with pollution. Look at China. It remains a communist state but has adopted capitalism. I think communism is a failed experiment and, when China goes, it'll be an interesting political artifact for the history books.

I mean, what is communism when it yields state control and ownership of everything? It's just another form of garden variety dictatorship.

The West has a rich history of getting along with undemocratic regimes provided they accepted our economic model, capitalism.

China today is a capitalist state operating under one-party rule. It's really the worst of both worlds.

One other little point. CO is indeed what emerges from tailpipes of our cars. Carbon monoxide. The thing about CO is that it then bonds with another oxygen molecule whereupon it enters its stable state as CO2, carbon dioxide. So, what comes out of your exhaust pipe is just temporarily incomplete CO2.