We've Got a Whole Lot of Killing To Do 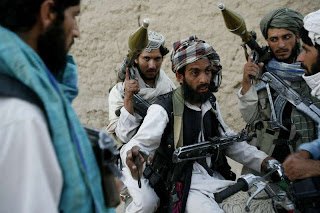 General Rick Hillier's estimate of a "few dozen ...scumbags" worth of Taliban in Kandahar province was always pretty stupid but now seems positively delusional. What was this guy thinking or was he even thinking at all?
Thanks to last Friday's prison break in our very own Kandahar province, the Taliban came into a fresh force of 400-hardened fighters. Now I would've thought the insurgents would be pleased enough to spirit their comrades away for a bit of R&R in some distant, safe rear area. Apparently not.
Over the weekend DefMin Peter MacKay assured us it was all the Afghan's fault that the Taliban were able to mass for an attack to overwhelm the major prison in our area and then get away, unmolested, with their liberated comrades. Terrible stuff, bad Afghans. He also assured reporters that Canadian forces were deploying in defence of Kandahar city.
Trouble is, no one told the Taliban that they were supposed to go to Kandahar city to duke it out. Instead they seem to have taken over a series of villages in a district north of Kandahar. From The Guardian:
"Around 500 Taliban fighters have taken over villages in Arghandab district, just north of Kandahar, Mohammad Farooq, the top official in the district, was quoted as saying by Associated Press.
The forces would be hard to remove from the strategically important area, a local tribal leader told the agency.
"All of Arghandab is made of orchards. The militants can easily hide and easily fight," Haji Ikramullah Khan said. "During the Russian war, the Russians didn't even occupy Arghandab, because when they fought here they suffered big casualties."
This one has a bad smell to it. When these guys stand and fight against vastly superior, Western forces, there's usually a solid reason for it.
By the way, Pete, remind me again just how much progress we're making over there.
Posted by The Mound of Sound at 9:07 AM

If they would have killed them instead of putting them in prison there would not be a problem.