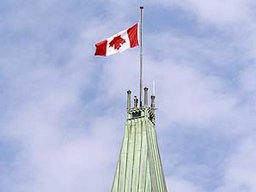 It's pretty clear whose side the Harper government is on and it's equally clear that's not the side of Canadians.

Senator and featherbedding former media shill, Mike Duffy, dismisses his fellow countrymen who oppose the bitumen pipelines as "all anti-Canadians."

Environment Minister, enviroshill Peter Kent, vouches for the Northern Gateway operator, Enbridge, despite the damning U.S. Transportation Safety Board report over the Enbridge pipeline bitumen spill in the Kalamazoo River, Michigan.   Kent dismisses the report, admitting that he didn't even bother to read it.

And now the revelations about Health Minister, Leona Aglukkak, who has been busily subverting her own ministry's efforts to keep Canadians informed about health hazards in their food whether it be sodium levels or trans-fats in processed foods.   Aglukkak has repeatedly overridden experts' recommendations that might inconvenience or even draw attention to errant food producers.

These are but a few examples of a government acting squarely against the interests of its people in fulfillment of a blatantly corporatist agenda.   It is a government that has made a fetish of information control and secrecy to confuse and manipulate public opinion.   Aided by a hapless  opposition and a collaborative corporate media, it is, quite probably, the most anti-Canadian government in our nation's history.
Posted by The Mound of Sound at 9:46 AM

It's a government that was bought and paid for long ago.

They are a government of incompetents lacking intelligence, imagination and vision. Never ascribe to maliciousness that which can be explained by stupidity.

I have to disagree with you Anon While this government surely has more than its share of incompetents within it,the government itself is not. Rather it is malicious to its core, a fact it masks with a veneer of ineptitude.

I was totally with you 'til the hapless opposition bit. I'd say the NDP are doing a pretty good job of calling out the Harper government...
other then that, bang on :)

It makes me sick I live in BC but not close enough to the Red Chinese Stephen Harper Enbridge Northern Gateway pipeline to have a say...

Excuse me this is my Canada too...

And I do not like the idea of Alberta bitumen fueling a RED communist regime...

While BC has to take the fallout, spills inland and on the coast and in the ocean...

Harper and McKay should have told the truth when they illegally melded the sickly Alberta reform party with the real progressive conservative party of Canada, now the two have lied cheated and stolen Canada from us honest citizens...

I am fed up with the Harper regime, from now on I am proud to say I am Canadian and as such I am voting NDP...