The State of the Plate Report - Slim Pickins 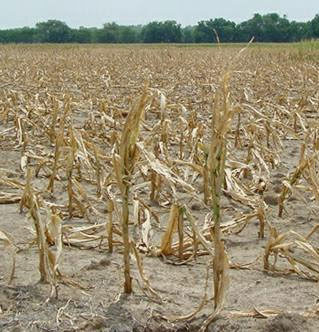 Where do global warming, water scarcity and overpopulation collide?   On dinner plates around the world.

When everything works as we want it to, year in and year out, we can realistically feed 7, perhaps even 9-billion people.   But everything isn't working quite right these days.

The hydrological cycle is broken.   The evidence of that is in the floods and droughts that are hammering just about every corner of the world.   Some places get whipsawed between the two.   Britain, for example, went through a year of severe drought only to transition into severe floods that have swept the country from Scotland to Wales.   Australia has had a similar experience.

Food insecurity may turn out to be the sharp edge of the climate change wedge.   World leaders, especially those in the pocket of the fossil fuelers, can shuck and jive over CO2 emissions but the destabilizing effects of food insecurity can't be swept under a fossil fuel carpet.

The Arab Spring was the result of a culmination of influences of which food insecurity was a key factor.   Food insecurity throws a glaring floodlight on inequality and despotism and can spark popular uprisings.

With the severe drought sweeping the U.S. this summer and devastating what was to have been a bumper corn crop, that leaves China, Russia and America - three of the four top grain producers - in a bad way.   Only India has fared better but this year's Monsoon has been disappointing.  Indian authorities warn that unless rainfall improves India faces a drinking water and crop planting crisis.

The elusive monsoon in 2012 has caused a water shortage of 61% from a year ago and threatens to cause a drinking water and crop sowing crisis.

The total deficit so far this season is 22%, but rainfall has been 40% below average in key crop-growing areas in the north and northwest.

India's 84 important reservoirs are filled only to 19% capacity, which is 41% lower than last year.

American authorities have already warned that this year's crop failures will result in a sharp drop in corn exports.

America is the world's largest producer of corn, dominating the market. Corn is also connected to many food items – as feed for dairy cows or for hogs and beef cattle, as a component in processed food – expanding the impact of those price rises.

That means the effects of the drought will travel far beyond the mid-western states baking under triple-digit temperatures, said Robert Thompson, a food security expert at the Chicago Council of Global Affairs.

"What happens to the US supply has an immense impact around the world. If the price of corn rises high enough, it also pulls up the price of wheat," he said.

He went on: "I think we are in for a very serious situation worldwide."

Some analysts are predicting a repetition of the 2008 protests that swept across Africa and the Middle East, including countries like Egypt, because of food prices.

Maybe, just maybe, it will be a collapse of global grain reserves that finally pressures world leaders into meaningful action on climate change.
Posted by The Mound of Sound at 7:50 AM

The food speculators are already at work raising prices. When will this stop?

When the politicians lining their pockets with the financial sector's generosity are stopped.

And that is why B.C. should ensure that every inch of farm land remains just that, farm land & not paved over & have malls & train yards built on it.