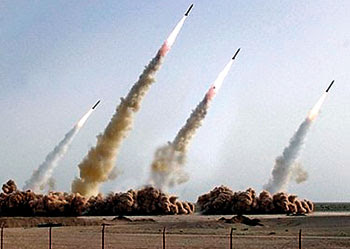 China is just one of several countries with arsenals of nuclear weapons.  Yet, unlike the others, the unusual structure of China's military forces may leave the country much more prone to nuclear escalation from a conventional war.

" [A] new study, previously only available in Chinese, appears in the latest edition of The Bulletin of the Atomic Scientists, published by SAGE. The authors believe that this is the first comprehensive non-governmental study on how China’s nuclear-war plan was developed...
“The basic dilemma for the war planners stems from the deployment of the two types of missiles on the same Second Artillery bases with fundamentally different capabilities and purposes,” Lewis and Xue say.

The article notes that Beijing’s nuclear missiles exist to deter a nuclear first strike on China, and are only to be used in extremis. At the same time, the conventional weapons on the formerly all-nuclear bases must be ready to strike first and hard. Targeted enemies and their allies will not immediately be able to distinguish whether any missiles fired are conventional or nuclear.

That disastrous outcome would force the much smaller surviving and highly vulnerable Chinese nuclear missile units to fire their remaining missiles against the enemy’s homeland,” Lewis and Xue warn. “Escalation to nuclear war could become accelerated and unavoidable.” Policies that have led to conventional and nuclear weapons doubling up at the same base could cause, rather than deter, a nuclear exchange.

If a dust-up did occur between Chinese and Western forces, some missile strikes could well be possible.   China, for example, has a missile specifically designed to attack and utterly destroy American fleet aircraft carriers.   Those carrier battle groups also deploy with their own nuclear weapons.   If a force detects an incoming missile attack but is unable to determine whether it's a nuclear strike, the commander could be sorely tempted to conclude it is just that and respond in kind.
Posted by The Mound of Sound at 8:12 AM