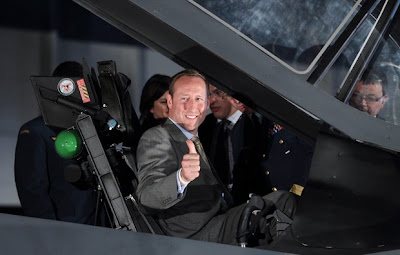 If Canada had been operating the F-35 since 1988, we'd probably be hard pressed to find any still flying.   Over the past 24-years, the twin-engine CF-18 has racked up plenty of bird strikes.   In fact the amazing fighter, selected by the Trudeau government, has, during that period, had 67-instances where its engines ingested birds.

A bird in the burner is always serious business.   But a bird in the engine of a single-engine airplane such as the F-35 is a far different thing than a bird in one engine of a twin-engine fighter like the CF-18.  Let's do the math.   Two minus one equals one.   One minus one equals game over.  One fighter has a chance of getting its pilot safely home.   The other - not so much.

And, since we can expect these bird strikes to continue, and the government and its military shills are talking of the F-35 as meeting Canada's needs for thirty years or more, and as we're buying just 60 of the overpriced, overdue and under-performing aerial White Elephants, logic and math suggest we can expect to be making do with a rapidly dwindling force once they actually become operational.

But, of course, when attrition sets in and we begin writing off the 35 in big numbers, we'll either be going back to Lockheed to buy ever more or maybe, just maybe, we'll come to our senses and cast about for a replacement suited to Canada's needs and purposes.  Maybe.
Posted by The Mound of Sound at 6:42 PM

Birds will be extinct soon in Harper's Canada(tm), except those with economic relevance, which will all have their wings clipped, so PsuedoCons can catch them to sell.