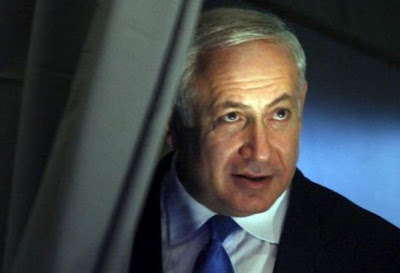 You might have thought the contest was between Obama and Romney.  Wrong.   It's actually between Obama, on one side, and Romney and Israeli thug Benjamin Netanyahu on the other.

Netanyahu has abjectly failed at pressuring Obama into attacking Iran.   Romney, it seems, doesn't share Obama's qualms and is therefore Netanyahu's BFF.   It's a high stakes gambit but, if Obama wins, it could rewrite America's relationship with Israel.

Israel’s blow-hard right-wing prime minister, the US-raised zionist Benjamin Netanyahu, openly trying to topple Obama, has propelled Israel directly into US politics, and has also been trying to push the US into a  war against Iran,  and he’s been doing all this in a manner so clumsy and overt that he may have fundamentally undermined the long-standing “special relationship” between the US and Israel.

As the long-respected American newspaper of American Jewish opinion, the Jewish Daily Forward, editorialized a few days ago:


It’s difficult to recall a time when an Israeli prime minister has inserted himself into a presidential election campaign in the way that Benjamin Netanyahu has. It’s even harder to recall a time when a trusted ally openly urged the American president to undertake a questionable, unpopular and highly risky war. We sure hope Netanyahu knows what he’s doing, because the stakes for him — and for the two nations he professes to care about the most — could not be higher.

The editorial goes on to note:


He may be overplaying his hand. Americans are deeply wary of another military involvement in the Muslim world. Most Americans oppose a military strike against Iran. Most even oppose coming to Israel’s aid should it be attacked by Iran. A recent poll by the nonpartisan Chicago Council on Global Affairs posed this hypothetical situation: Israel attacks Iran, Iran retaliates and and the two nations go to war. Only “38 percent say the United States should bring its military forces into the war on the side of Israel. A majority (59%) says it should not,” the poll showed.

...Obama and the Democrats, increasingly dependent upon the votes of Latinos and African Americans, younger people, women and left-leaning people of all races, are recognizing that slavish support of Israel, and particularly for an Israeli desire to launch a disastrous war against Iran, are not positions that are likely to win national elections. Polls show that the American people are tired of endless wars in the Middle East, as the Daily Forward editorial correctly notes. They are also troubled when they hear American politicians say that Israel’s policies are America’s policies.

...If Obama, as looks increasingly likely, manages to win re-election while continuing to resist Prime Minister Netanyahu’s blistering criticism and blustering calls for war, the longtime unseemly grip of AIPAC on US Middle East policy will likely be broken, and with it will go the influence of the neocons who have been pushing relentlessly for American imperial domination of the Middle East.  Once a presidential candidate successfully stands up to AIPAC and to Israeli political threats and succeeds in nonetheless winning election, the lobby’s power to threaten and intimidate dissolves.

But Bibi may have a lot of hard work ahead of him.   Recent polls
show Obama with a substantial and apparently growing lead over Romney with American Jewish voters.

...The rise in Jewish support for Obama, seems to indicate that American Jews are less concerned with Israel than might be thought. Accusations that Romney has been making, such as accusing Obama of "throwing allies like Israel under the bus," and failing to deal with Iran's nuclear program, don't seem to be helping garner Jewish support for the Republican candidate.

With numbers like this, Netanyahu's gambit acquires an air of fear and desperation.

Netanyahu is already an Associate Prime Minister of Canada and now he wants to take over U.S. He is a crazy man.

“Meir Dagan, a former head of the Israeli intelligence service Mossad, says that an attack on Iran would be the "stupidest idea [I've] ever heard."

Dogan is retired but having worked for Mossad and having been its head knows something. He has more in depth knowledge & intelligence than Netanyahu. But Netanyahu is stupid enough that he refuses to give up and refuses to listen to calm-headed people.