How Safe Are Genetically Modified Products? 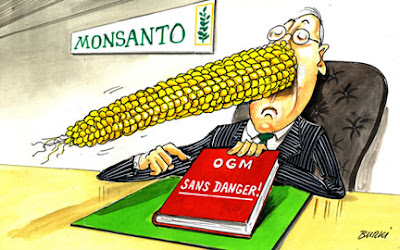 The French government has directed its scientists to verify a study that found a genetically modified corn developed by Monsanto could be toxic.

Even at low doses, the GMO studied was highly toxic and even fatal for rats, to the point where if it was a medicine, it would be immediately suspended pending further investigation. It is this same GMO that ends up on our plates, when it is used to produce meat, eggs and milk.

In the 13th month of the experiment […] the incidence of tumours in rats of both sexes fed on GMO corn was two to three times higher than it was in rats on a GMO-free diet.

I really hope they reach a solid conclusion, but that will be years away. The sample size (200 rats) Health Canada had used for its own study was far too small to withstand sustained criticism and pressure.

Hopefully, there will be more in-depth studies to bring about a firm conclusion. It's also a damn shame Canada doesn't force companies to label whether the food they're selling has been genetically modified, as the rest of civilization does, so that people can make their own choices about the food they eat.

Most of what I read says this study is not a very well designed one. So the problem isn't one of the verification, it is of actually doing a good job of it in the first place. (A link for one place to start: http://doccamiryan.wordpress.com/)

Also, the conclusions of this study, such as they are, don't reconcile well with previous studies.

Despite the veracity of this study's findings, consumers should have the right to make their choice whether to buy GMO products or not. At my local health food store, the staff could not confirm whether there were GMO products in some of their "organic/natural" prepared foods that listed canola in the ingredients. Right now the Canadian canola market is saturated with GM seeds.

I don't really know, but it would not surprise if certain brands could say they were non-GMO. There is likely a market for a certification agency for non-GMO crops, if one doesn't exist already. If certain consumers want non-gmo food, then they could look for products that bear its mark. This seems to work fine for "organic" or "halal" or "kosher", etc.

There is no need to label all food products as to whether they contain GMO. And no need for the government to get involved in doing this.

South Korea also has done studies on this subject and have found the same findings as France. Play around with nature and put up with its revenge...that being unhealthy food and toxins. South Korea also did a study on corn syrup and its effects on obesity...it is detramental to health.