She's rusting away on the seabed barely 75 feet below the surface.  The experimental Soviet nuclear submarine K-27 is a disaster waiting to happen in Russia's Kara Sea that adjoins the Arctic Ocean.  On just her third cruise, 7-crewmen died when the ship's reactor malfunctioned.   Soviet authorities eventually chose to tow the sub to the Kara Sea for disposal. 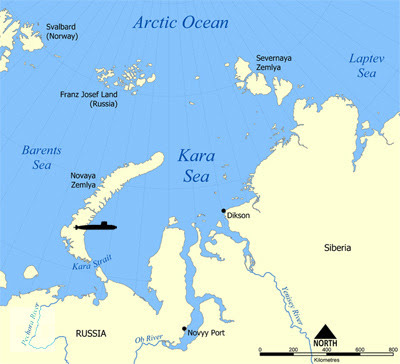 The K-27 has been rusting out on the seabed for 30-years and Russian authorities now want to raise the ship and properly dispose of it fearing it will otherwise trigger an "uncontrolled chain reaction."

The Russians are apparently hoping that oil companies eager to drill in the Kara Sea will be prepared to deal with the K-27.  But, as Russia Times reports, this sub is just one of the threats that line the bottom of the sea.

The Russian government has recently released archives showing that there are 17,000 containers of radioactive waste, 19 ships contaminated ships, and 14 nuclear reactors in the Kara Sea – and most of these objects have been decaying there since the Soviet era.
Posted by The Mound of Sound at 12:30 PM

How do you tell a Russian submariner from other Russian sailors?

He's the one who glows in the dark.

Makes you appreciate what a fine job Adm. Rickover's gang did, and how good the gang at Electric Boat are.